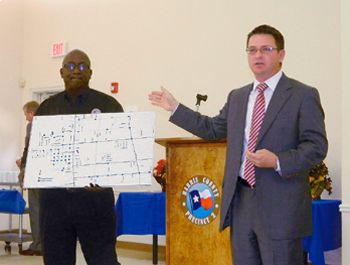 Calling it The New Precinct 2 Morman talked about initiatives to eliminate or control game rooms, and related crimes.

He spoke also about a program called Safer Streets 4 Schools, which will improve access for children walking or riding to school, by providing sidewalks, and improved intersections and queue lanes.

He noted that the court battles were over on redistricting, and voters did not need to worry now about district lines. He now has 15 cities within his precinct. He services the area with 380 employees.

Morman said his budget is balanced and in good shape this year, and he will be able to add 25 streetlights to the Highlands area.

He mentioned two issues that will be on the ballot in November. He is strongly in favor of a joint processing center, a joint city-county intake facility for arrested or detained individuals.

The other ballot issue is a vote to save the Astrodome, with a related small tax increase. He is not in favor of this item, due to continued expense and an undefined purpose for the building.

Morman said that future projects include a new landing at the fairy, and major construction and enlargement of the East Belt and the bridge over the ship channel. He said the budget will exceed $1 Bil.