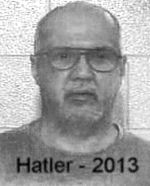 CROSBY  One should consider that if you cheat or steal from a church not only might there be earthly consequences but there are eternal risks as well.

Back in early October an elder of Crosby Brethren Church met with Constable Ken Jones concerning the purchase of a sign for over $6,000 that had occurred last July.

One person had gotten a good sign from the company and the company would recruit others based on the good deal.

According to Bob Ward, that elder, the incident concerned the purchase of sign over the internet from a company named SignTech Manufacturing. It was determined that the website for SignTech was no longer operational and the telephone was disconnected.

Constable Jones assigned the case to his Investigative Division. Working with federal investigators, it was determined that a Tim Sheehan doing business as a representative of SignTech was in fact a man named Timothy Hatler. Investigators determined that Sheehan was one of several alias names used in over 20 websites.

Now the local address allegedly hosting SignTech was given as 700 Louisiana, Suite 3950 in Houston but the investigators determined that a phone and address service was being used to mask their out- of-town location from January until August 2013.

The National White Collar Crime Center, Internet Complaint Center (United States Dept. of Justice) was contacted regarding SignTech. No record was found of criminal activities at that time. The Constables Investigators asked that SignTech be entered in the system to watch for criminal activity.

The Federal Bureau of Investigation out of Louisville Field office in Kentucky, called Precinct 3 on October 28. The two departments exchanged information and during their comparison determined that Timothy Hatler, a.k.a Tim Sheehan, was wanted in Kentucky and Michigan for the same type of internet thefts.

A series of calls were made between the F.B.I, Somerset Police Dept., Utica Police Dept., and Precinct 3. It was decided that the F.B.I. would handle a multi-state investigation. Federal officials interviewed Timothy Hatler as he was in custody in Somerset, Kentucky.

According to Ward, what began with a notice from a church in Alaska to the notice from Precinct 3 in Crosby, Hatler had many complaints. At the Kentucky location, he was confronted with known facts. He confessed to taking funds from the church in Crosby.

Constable Jones said that Hatlers criminal record for internet crimes would accrue judgements for $340,000. Jones stated, remember to verify who you are doing business with when using the internet.

Hatler now is facing crimes in Georgia, Alabama, Indiana, Kentucky, and Michigan, according to Jones.