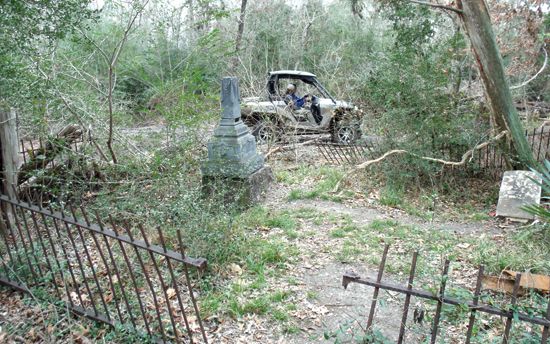 CROSBY Last Saturday this reporter was shown some disturbing destruction by a Harris County Sheriffs Deputy including incidents from the Newport Subdivision through the area of the Center Point power lines alley R.O.W. to the desecration of a grave on some private property that belonged to a family that had settled here early in the history of this area.

Deputy Greg Nason and this reporter left from the Newport Subdivision gate on the east side of South Diamondhead Blvd. on a side-by-side All Terrain Vehicle and had just begun our journey when we encountered inside the pristine woods near the San Jacinto River where someone had decided to make an illegal trash dump.

Moments later we encountered a confessed trespasser that told the officer he was going to fire a rifle over the R.O.W. area. As the would-be-marksman was being detained his ride along, whom he said he did not know, ran off though the woods. Lots of deputies would be called to the scene then.

After some looking at damage inside the Center Point Area we came to focus on a clearing inside some woods. There, several people were hanging around near various kinds of all terrain vehicles.

Deputy Nason asked, May I ask, what are you folks doing here?

He was answered by a young man, Its okay officer, the safety man was just here and said we were okay to be here.

What safety man? Do you mean from D.S.O.? the deputy asked.

Well, this isnt their property and beside there has been some damage to this grave over here by someone and that is why I have brought this gentleman out to record it. said Deputy Nason.

A woman said, Okay, we dont know anything about any of that. We thought we were okay here and we want nothing to do with any grave desecrations. I would not put up with anything like that.

Shortly thereafter, the group left in various directions including near the marked up, scuffed gravestones, near the torn down iron fence, isolating some of the older graves that have had their headstones torn down and the site of a metal grave knocked around and broken, that was the burial place of John Simms. He was born in 1812, he would have been 24 years old when Sam Houstons 910 volunteers faced off with Generalissimo Santa Annas about 1560 member Mexican army.

Now, Clay Steely of Porter Hedges LLP says on Feb. 10, I am a lawyer for Lakewood Development Corporation (Lakewood). I was contacted late this afternoon about the unauthorized use and entry into certain Lakewood property in Crosby. Lakewood first learned of this unauthorized use and entry yesterday, when Greg Nason of the Crosby Sheriffs Department showed the Lakewood representative what was occurring from the CenterPoint ROW. Lakewood is investigating this situation and will take whatever action is necessary to protect its rights and property.