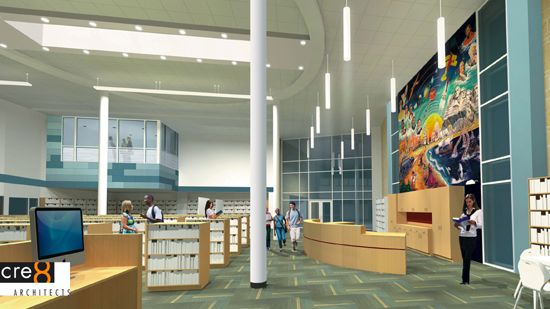 Crosby High School will not have a library as we think of one now, because the term obsolete applies to the concept of library that has mostly been extant since Socrates was questioning What do you know? and being made to drink hemlock because he made young people think.

No, the library of the future is called a Media and Research Center because the student most likely walks in with a devise such as an electronic tablet maybe an outdated lap-top or smaller smart contrivance that connects them to an entire universe of information.

It must be difficult to predict then needs of three decades in the future of education. Yet efforts to make a modular and adaptable learning center are underway.

Few predicted the burning of the library at Alexandria by Julius Ceasers troops would be an educational catastrophe in first century education because irreplaceable ancient papyrus blazed.

But there will be far fewer books (but some) at the Media and Research Center because information is less stored in that outmoded papyrus fashion.

Lets go back just 35 years to when this reporter was in college, there was one massive computer at my college and those of us taking calculus and physics had to reserve time to work on the computer and then learn to write a program. Probably the oldest computer still working in this area could run circles about this multiton featureless cube. Then working with binary code (ones and zeros) students could make the 8 inch by 11 inch display show something. I made a cannon fire a ball on the interval from zero to 100 owing to a formula. I have never written binary code since and have never written a program since but have used computers most of my working life. The college had me learn to do these things to prepare me for the future. A future where the petty skills I learned would be pathetic parry to proficient attack of a maturate diabolism raging to disesteem any of less than hyper-modern erudition of technology to wretched poverty. But, I digress.

The adaptations of the Media and Research Center is that yes there is planned to be some of the latest and greatest gadgets like a three dimensional printer but mostly it is where students will bring their apparatus and contrive with collective appliance to work together to learn lessons.

The Media Center has to be a place for collaborative learning so it has to be adaptable for coming technology, said Dr. Keith Moore.

He indicated that there are to be two types of lecture halls within its confines and that the architecture must be malleable and adaptable including tables and chairs with casters to be easily moved around for realignment. The structure will be within two stories one of greatly open area with much natural light and a smaller area with a more personable and interactive setting.

The simple fact of the matter is that whatever devises or hardware they purchase will be outdated soon thereafter in a exceedingly expansional unfolding of knowledge technology.

The Media and Research Center is outside the overwhelming Technology Learning Center that will also occupy two stories.

The goal is technological integration and with that personalized learning will be facilitated to the students own capabilities in an effort to keep pace with a slight edge on worldwide proliferation of knowledge.