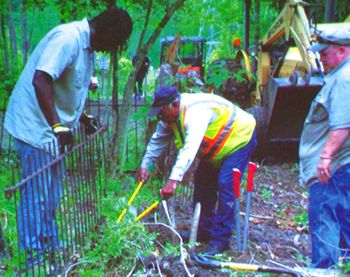 CROSBY  Local history buffs have gotten some cleanup done with the help of Harris County at a local family grave that was disfigured and is about to achieve making three local family graves historically designated areas.

The Crosby Historical Society meet last Saturday at the gymnasium of Crosby Brethren Church. The topic of the meeting was about the history of local dairies with an update by Susan Armstrong about the Simms grave just south of the Center Point Power R.O.W. lines.

In the future the Society will perform ceremonies to recognize the Texas State Historical Associations Historic Cemetery Designation of the Simms Cemetery, the Penn Cemetery and McKinney grave, the latter having been marked with a Texas Historical marker that had been riddled with bullets.

On February 8, the family grave was found to have been altered by someone carving Slayer on the back of one of the gravestones, and assorted damage to the grave area in general. Harris County Sheriffs Deputy Greg Nason accompanied this reporter on a tour of damage occurring west of FM 2100 not the least of which was the Simms family grave site. The resulting article was printed in the Star-Courier on February 12.

Recently, with the help of the Harris County Roads and Bridge Department under Jack Morman Commissioner of Harris County Commissioners Court Precinct 2 crews and volunteers from the Crosby Historical Society got busy with cleanup.

Alton Chishom headed the road crew from Precinct 2 based upon the filings of Deputy John Ray Harrison of Constable Ken Jones Precinct 3 and instruction from Gretchen Knowles of Harris County Precinct 2.

The Society found a tree fell on the graves. The iron fence around two of the graves had been torn down and some of it rolled up together. Underbrush had grown about the graves and a headstone was knocked down and the obelisk cap on Captain Simms grave had been knocked down and now cannot be found. Substantial trash and debris was found within the cemetery.

Bill McKinney filed the documentation to have the Simms and Penn Cemeteries designated with a medallion and protective fence. The group is meeting to determine how to get the Penn Cemetery fence constructed and it is assured that the Society can obtain a marker. Both the Penn Cemetery and the Simms Cemetery have Civil War veterans interred. Both served in the Confederate Home Guard a designation of under age 17 and over age 55 males that guarded the railroad trestles and bridges of the San Jacinto from Union attacks.

Efforts are underway to restore the Simms obelisk as was done for the Humphrey Jackson obelisk by the same company as had made the Jackson restoration.

Historically, Mercer McKinney enlisted in Captain John Simms Company Texas Home Guard. He became ill from exposure while guarding Federal Prisoners and died Jan. 11, 1863. He is buried to the south of the Simms Cemetery. His widow Mary later remarried to his old friend, John Milburn Simms. Historical designation says that John and Mary are buried in the Simms cemetery just north of the Penn Cemetery and to the southwest of Black Hope Cemetery.

The road crews dug up the part of the fence that was buried, set it upright wired the fence together. The fence originally probably had two gates like a French door. Hopes are that the grave can be restored as it originally was.