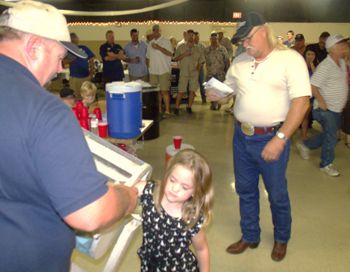 CROSBY  With the exception of the car show having to be called off until Sept. 20 due to impending thunder clouds, the Klobassa Festival at the Knights of Columbus Hall last Sunday was the ticket to fellowship and bid on some great items during a live auction.

The auction was so extensive it wore out the voice of one auctioneer and Bill Busby filled in to take up the slack. A Czech barbecue was served for $10 and the amounts of funds raised was not available at press time on Tuesday.

One proud bidder paid $660 for a carrott cake in good cheer as his friends joked about it, then he donated it back and bought it back again.

Catching bids among others was Justin Wrestler and at least one baked good had the bid elevated after several personal inspirations from Wrestler.

Those with winning tickets can claim their prizes at ACE Hardware in Crosby after a chat and background with Mr. Vernon Hord.

But the real reason for the Festival is a great cause. Sacred Heart Charities and scholarshps for Sacred Heart School students.

The Knight of Columbus contribute significantly to the surrounding area and now there are two chapters in the Crosby vecinity. The next attempt for the Car Show, that is to feature cars, motorcycles and tractors will be Sept. 20 and there is to be a Fish Fry at that time.

The winner of the covetted Panter AR 15 had bought six tickets at the Crosby Fair & Rodeo Cook-Off. He was pleased to be the winner and when asked what he suggested for would be future winners said, Buy more tickets.