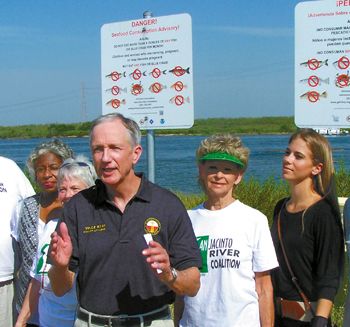 Two of the polluting companies, Waste Management and their subsidiary McGinnes Industrial Maintenance Corp. agreed to a settlement before the trial went to final arguments.

They agreed to pay $29.2 million in penalties to the plaintiffs. The third company, International Paper, was excused from the suit by the jury on a 10-2 vote, late in the afternoon.

Speaking at Highlands Rotary club this week, county attorney Vince Ryan said that the money would be split in thirds, with $9 million for expenses and attorney fees, and the rest split between the state and the county. The money will go to the general fund, he said, not for clean-up of the sites. He hoped, as Commissioner Morman had said last week, that some or all of the county money would be used for environmental projects near the river, but the county will have to decide later on this.

The county had originally asked for damages amounting to $25,000 per day for all the time the waste pits existed, back to February 1973. This would have amounted to over $400 million dollars, with interest. However, the settlement was far short of this. Ryan was asked if this was a victory or defeat, and he said that they never expected to get a big settlement, but it was a victory because a message was sent to industry that they were responsbile for their wastes, even years later.

The attorneys for International Paper had argued that they were not responsible for the waste after it was turned over to McGinnes and out of their control.

The attorneys also said that the county had failed to show examples of dioxins escaping from the pits on a regular basis and causing health problems in the population around the riverfront.

Ryan said that this ends the lawsuit between the county and the waste companies, but he feels that the judge was incorrect in ruling that International Paper was not a responsible party, and he plans on filing an appeal very soon. Some evidence was not admitted in court, he said, that would have made a difference.

Meanwhile, the Environmental Protection Agency is still studying various schemes to deal with the waste pits. Six scenarios are being studies by the Corps of Engineers at the request of EPA, ranging from making the membrane cap more permanent, to excavating and hauling away the toxic material. Ryan said that a new estimate has placed this last remedy, which is favored by the nearby residents but not the companies, at $100 million dollars, much less than previously stated.

In his Rotary talk, Ryan said that removing the toxic material is the only decision that makes any sense.

Jackie Young, present at the meeting, said that although the settlement was fair, she would like the money to be used for studies of health issues among local residents.