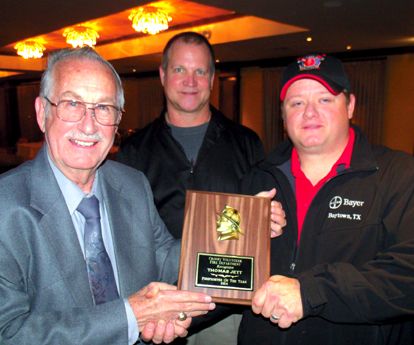 KEMAH  The local fire department has celebrated a busy but successful year here with comraderee and enthusiasm.

In 2014 Crosby Volunteer Fire Department ran 922 calls. A few less than last year but 836 calls were from inside their District which covers the same land mass as Crosby ISD, it is one of the largest square mile districts in the State of Texas.

Last year only 808 were inside their district.

During this busy year they decreased their response time to 9.77 minutes down from 10.42 minutes a significant reduc tion in response time.

With Harris County Emergency Response District #5 in partnership the Harris County ESD#80 (the taxing entity for the local fier department) signed an agreement during December to begin construction of of a heliport pad and an instrument guided flight pad to Crosby Fire Station #1 (the station on US 90.) This will enable Life Flight helicopters to land in Crosby during inclement weather. It is said that this development will be a valuable service to varied E.M.S. departments not only including Crosby paramedics but also Dayton, Liberty and Mont Belvieu once completed.