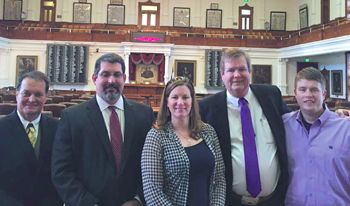 AUSTIN  Crosbys Scott Stephens has set in motion the passage of legislation that will require an electrocardiogram heart test for student athletes.

Locally, many know that Cody Setphens died on May 6, 2012 a day before graduation of sudden cardiac death. Many know that Huffman ISD required the test but Crosby ISD did not back then.

I ask people all the time Do you want to go to your doctor and say Give me the same physical you gave my dad 35 years ago?, and thats really what were doing for our kids, said Stephen.

Wording in each of the bills is the same, and another Senator, especially a Republican is welcome to file a similar bill which reads:

Except as provided under Subsection (d), a school district must require a district student who is required under University Interscholastic League rule or policy to receive a physical examination before being allowed to participate in an athletic activity sponsored or sanctioned by the University Interscholastic League to also have administered to the student an electrocardiogram before being allowed to participate in the activity, including a practice for the activity, as follows:

(1) one time before the students first year of participation; and

(2) another time before the students third year of participation.

If passed, Texas would become the first state in the nation to require student athletes to undergo electrocardiogram testing. The test would cost $15 each with agreements that Setphens initiated with healthcare providers and hospitals.