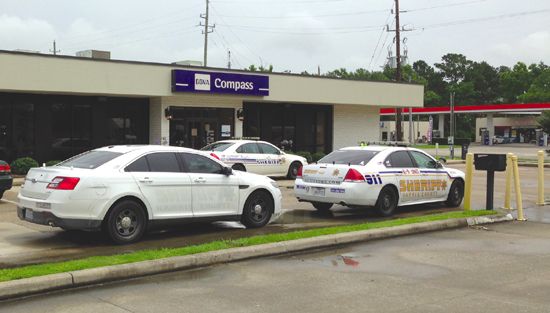 CROSBY  A man sits behind bars today charged with a single count of federal bank robbery in connection to a stickup of the BBVA Compass Bank here Monday.

The FBIs Violent Task Force has a lot of work ahead of them as they try to determine the facts of a robbery at about 9:19 a.m. May 18 at 6011 FM 2100 and South Diamondhead Boulevard.

Harris County law enforcement wondered what relationship, if any, two African- American men have that one entered the bank and asked a question then as he was exiting opened the door for another man that stood about 57 and weighted about 250 lbs. wearing a dark hoodie and had a stocking over his face.

The F.B.I does not believe the two were connected at this time. The suspected robber charged into the bank ordered everyone onto the floor at weapon point and demanded cash. He selected one teller and ran out with some cash. No one was injured during the robbery.

Seven local schools, and the daycares were locked down during this time. According to Dr. Keith Moore at 1:30 p.m. the schools were taken off lockdown.

A man had been detained in the interim But his name and mug shot have been delayed release due to Department of Justice policy.

Then there is the crazy part, an S.U.V. was parked just outside the Crosby Volunteer Fire Departments Station 2 exit on South Diamondhead Blvd. with the lights flashing. Traffic had to steer wide to go around the vehicle headed to FM 2100. The S.U.V. had logos on its side saying medical consultant and Reliant Energy. The suspect had dashed into the woods next to Newport. The S.U.V. just sat there flashing as dogs, helicopters and Harris County patrol units swarmed the scene looking for a man on foot. Hard as a man can run, the radio is still faster. If you have any information on this crime, call 713-222-TIPS (Crime Stoppers.)

In the last days of January this year another man pled guilty to robbery of a bank in the Galleria area, he received 78 months federal sentence in a U.S. Bureau of Prisons facility plus 4 years of supervised release and has to pay $2, 927.51.