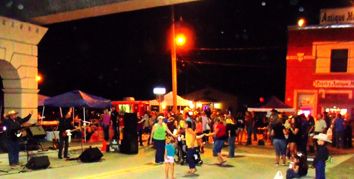 CROSBY  The New Crosby Street Dance was Saturday, Oct. 17 with loads of features for the locals to hear view and enjoy.

It was an event of live music, food vendors and shopping.

This was the first of what is to be an annual event, according to Danny Jones We are trying to get it back. We are making this a free event on our dime this time. Hopefully next year we can get a little support and sponsorship.

Many remember folks from throughout the area coming to Crosby from the 1960s up until the Mid-1980s to attend the Crosby Street Dance.

We got the permit with TXDoT and are looking forward to having the Pink Fire Truck with the Superheros on it coming. Its never been to Crosby before. We want this to be a family event. Jones said.

Scheduled Live Music events continued until 10:00 p.m. It began with karaoke by Karaoke Korner from Noon until 3:00 p.m. The Dayton Academy of dance performed at 2:30 p.m. The Bootleg Country Band played at 3:00 lasting until 6:00 as lead for the title feature, Jason West and West of the Trinity Band, from 7:00 until closing at 10:00 p.m.

Making their appearance with two regular pink fire trucks and another with a giant kids moonwalk, called the Kids Fire Truck, the Pink Healers Breast Cancer Pink Fire Trucks made their appearance about 5:30 to bring awareness and support to our community. Support the fighters, admire the survivors and honor the taken and never give up hope.

Each year through Bras For The Cause, Crosby Fair & Rodeo supports the Pink Healers with contributions