This acquisition is said to have begun back in August of last year in a Board of Directors Action article as related to the owner of the golf course was planning to sell off the driving range and part of the parking lot to a developer for single family homes.

This was said to have come from a fear of property values declining.

In December, President Nancy Gaudet announced the plan to buy the golf club and conference center at the Crosby -Huffman Chamber of Commerce luncheon and named a new Director of Events, Glenda Logsdon.

On Tuesday, a phone call to that new director to find out details of the acquisition was met by the statement, I no longer work there and cant make a statement about the disposition, some board members have taken over.

A call to the pro-shop also said that members of the NPOA had taken over and referred the reporter to speak with Nancy Gaudet by name and recently reelected board member Margarette Chasteen by telephone number, concerning planning events.

The party could not be reached at press time.

The amount of the purchase comes with the understanding that the property is in need of maintenance and improvements.

END_OF_DOCUMENT_TOKEN_TO_BE_REPLACED 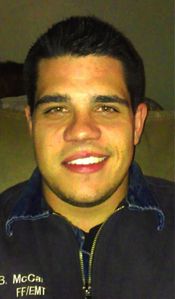 Named to the top award as Firefighter of the Year by popular vote of the firemen, was Firefighter Brandon McCartney, who passed away November 4, 2015 after a tragic illness. Brandon was a member for 9 years as a firefighter and medic.

A tribute to him was given by his friend Joseph Gamez. The award was presented by Tim Kelly, son of Cecil Kelly, for whom the award is named.

Chief Little also reviewed the department accomplishments and history of service calls for 2015. Safety remained a priority, with one major at fault accident. Also, two accidents occured with fire apparatus, which were not the departments fault. A new 2014 Dodge Diesel ambulance was put into service, and two new engines went into service in May, to replace E17 and E27.

A kitchen and remodeled day room were built at Station 17, and design work was started to build a new Station 27 on E. Wallisville Road.

Glenn Chisholm reported on accomplishments in the training of new members, and training and certification of existing firefighters. Currently 21 members have a SFFMA certificate.

Tracy Neathery reported on EMS accomplishments for 2015. This department now has 22 part time paid crew, including 3 basic EMT, 4 Intermediate, and 14 Paramedics. One ambulance is manned 24 hours, 7 days a week, every day of the year. The other ambulance runs at Peak Hours, 8 am to 6 pm. Response time averages 6 minutes. The department had 12 full heart arrests, with 6 ROSC.

Chief Little reviewed the history of the department for 2015. He noted that there were 2489 call for service, compared with last years 2234. 1749 EMS calls of which 981 required transport to a hospital, and 740 fire responses, up considerably from 426 last year. Life Flight was called 20 times. The department responded to 162 Motor Vehicle Accidents.

END_OF_DOCUMENT_TOKEN_TO_BE_REPLACED 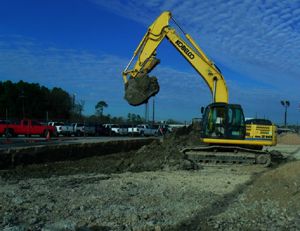 CROSBYDrivers eastbound on US 90 and the Beaumont Highway will soon be impressed by a new vista, a new state of the art showroom and dealership in a familiar location. This development brings with it an image of a burgeoning area.

Robert Turner was interviewed about a new dealership building housing showroom and mechanical center for Turner Chevrolet that sits off FM 2100 at 21001 Crosby Freeway, even as he was watching tractor work inside what had been the parking lot.

Standing inside the service department Turner described what is going on inside a fenced area.

As soon as you crest the rise after the river its going to look like a two story building, it is going to have very tall ceilings in about six to eight months.

This is actually phase two of our construction project , Turner answered concerning the starting tractor work, Phase one was to take the area that was green grass and turn it into a parking lot so we could actually relocate some of our inventory from this proposed building site. They have starting excavating that area. We are going to take about four feet of dirt out then we will bring back some select fill and get it prepped and ready for foundation. Once they pour the foundation they will erect steel for the frame.

At the same time, we are putting new light standards, they will all be tied to the new building.

We will do a soft opening to make sure everything is operational before we move on to a grand opening.

Administrating the continued operation of a dealership, keeping ahead of competition on value and building a new dealership has to be a challenge, how does one go about that?

Well, its all about people. If youve got good people that know how to do something and those that know how to take instruction they make the process. I go back to Tom Landry or Vince Lombardy; I use the football example. Those guys understood the game but still had to have the right people because they didnt play the game anymore. But, they knew what needed to be done on the field, the knew how to encourage people to do what needed to be done and what plays to call, things of that nature: Our business is no different, you have to have people that can execute.

The question of how Turner found potential in a dealership that had endured problems became evident.

Job one for me was staffing; finding the right people to come here and work, take care of the community. That is what we did, spend the time and energy to look for the right folks. God knows the wrong folks came through here too many times. I thought this might be the last hurrah, the last opportunity for this community before they said, You know what! General Motors could not appoint a good dealer, dealers couldnt find the right people and we are going to start driving by some towns. Its always a challenge to find someone to come in and repair an endeavor that has been run into the ground but that is what I do best. Im good at looking to see what is possible in a situation that looks impossible to the untrained eye.

The fenced area is to house the new showroom, within that will be new offices.

Where the dealership is now will be retrofitted for service and parts. Where the covered area is now for service drop off, we will have twice this area. As time goes by we hope to add things like a drive through car wash and other amenities. But, first things first, we need to get the main showroom completed, get the remodeling done in service so we can take better care of our customers. After that we will start looking at other opportunities. You know I have other operations. Everything this operation generates we are just pouring right back into it.

END_OF_DOCUMENT_TOKEN_TO_BE_REPLACED 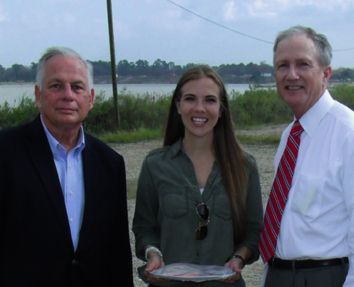