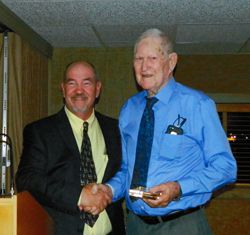 HIGHLANDS  A large crowd was on hand last Thursday night, as the Highlands Lynchburg Chamber of Commerce held their annual Awards Ceremony and Installation of Board and Officers.

The featured speaker was State Representative Wayne Smith, and the presigious Terry Davis Award was presented to Highlands Resident Archie Bickley. Bickley attended with a large contingent of his family and friends.

Bickley is well known in the community for his service to various organizatioins, and his work with the Sampson Masonic Lodge.

The Terry Davis Award, given each year to someone who has shown outstanding service to the community, and is determined by a popular vote of Chamber members and the public.

The awards ceremony was held at Monument Inn, and the emcee for the evening was outgoing president Traci Dillard, and later new president Jim Wadzinski.

Judge Mike Parrott, in the last year of his term before retirement, swore in the new and returning board members.

State Representative Wayne Smith was the keynote speaker of the evening. He welcomed the guest and new board, and then told of his years as a civil engineer, a veteran, a resident of Baytown for 40 years, a Rotarian, and in the 84th Legislature he was chair of the License & Administrative Procedures committee. He then covered the highlights of the session.

Awards were presented by new president Jim Wadzinski. Jim then proceeded to outline a plan of action for his term as chairman in the coming year, including improving government relations, getting to work with the school districts, helping decide how to use the waste pits monies, and restoring the Chamber building.