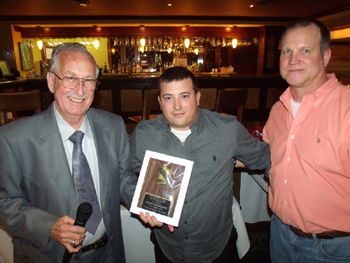 KEMAH  When demand for your services are increasing by 15% or more each year generally that is a good service but this time the good is within the men and women that perform the service.

At a special recognition dinner at Landrys Restaurant Saturday, Chief Alan Kulak, Fire Marshal Kevin Pipes and officers of that department recognized just some of the distinguished records of those serving with them. The Ladies Auxiliary recognized each of the firefighters individually.

Jerry Brogdon was Firefighter of the Year and recognised for making the second most calls.

Russell White was again recognised as Officer of the Year.

Hernando Andrada was recognised for 25 years of service and Dwayne Ringo for 10 years. Andrada was unable to get his work detail relieved that night. Chief Kulak recalled recruiting Ringo at the Apaseo Restaurant blaze.

Chief Kulak says that there is plenty of reason to join other than helping the community. Many volunteer move on to become paid firefighters. Like Ringo, it is especially helpful to have E.R.T. experienced volunteers from the petrochemical industry as that experience is helpful in rapid progression through the qualification for firefighters. This year Health and Fitness and Rookie of the Year got special recognition. Warren Thompson received a FitBit monitor on behalf of his contribution in health and fitness preparation. And Kimberly Delgado, first female firefighter recognized by the department, was Rookie of the Year.