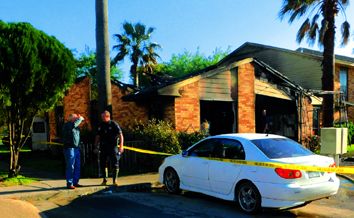 CROSBY  According to the Crosby Volunteer Fire Department they were called to the Crosby Plaza Apartments at 4:47 a.m. on Tuesday.

Upon arrival flames shot from the apartment office, the laundry room and adjacent apartments.

It seems that at least four apartment homes were destroyed by the blaze in addition to the office and laundry room. As fire fighters arrived several gas lines exploded.

Indications are that the most burned area was the laundry room where live powerlines entered the building. The fire fighters had to have CenterPoint Energy come out and shut down the gas to the laundry room before effective fire fighting could begin.

Harris County Fire Marshals arrived sometime after 5:30 a.m. and were still conducting investigations at the scene until about 11:30 a.m. They say the fire is still under investigation.

Witnesses say there had been a man shouting that he would burn the place down if they did not put him up somewhere on Monday. But, authorities have yet to confirm that information or that the man had been living in a unit for two weeks.

Neighbors and fire fighters took as their first task to evacuate those in the path of the fire. Due to those efforts, no one was hurt.

Crosby ISD had expressed concern for the children living in the apartments even before the fire, Many families have lost their homes. We have been in contact with many of the families affected by this mornings fire. The Red Cross has also been on site to assist the families temporarily. Many others have asked how to help. At this time, we are asking that donations be taken to CUIC here in Crosby, located on Church Street so that we have a central location for donation collection and distribution.

Thank you for your concern and generosity as weve had many students directly affected.