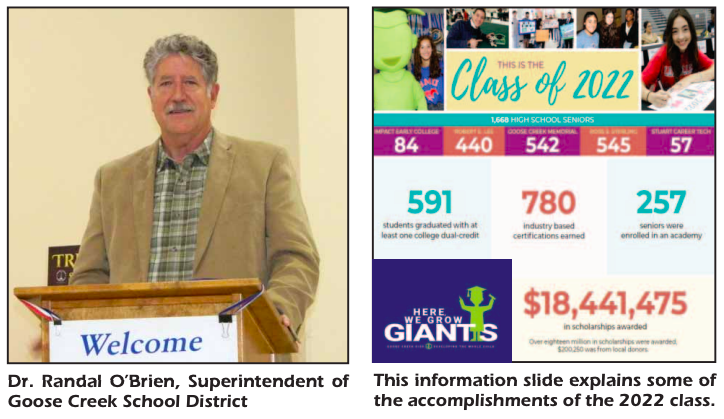 HIGHLANDS – “Here We Grow Giants” was the message that Goose Creek superintendent Randal O’Brien delivered to the Highlands-Lynchburg Chamber last Thursday at their monthly luncheon.

O’Brien showed slides and gave an extensive talk about all of the innovative programs offered by his district, and the accomplishments of the students and graduates.

However, he said he thought the story needed to be heard by more of the public, and he has been making rounds of service clubs and chambers to help explain what good things happen at his district.

Since his appointment as Superintendent in 2014, he has seen the district grow from 25 to 32 schools, now with 24,000 students, 4000 employees, and $18 million in scholarships every year for seniors.

His slides demonstrated many of the innovative programs, including career academies, 21 athletic programs, two Apple recognized schools, a robotic center, and two Early Learning Academies for Pre-K. O’Brien was questioned whether Highlands would get an Early Learning Academy, and he said they are looking at the numbers, but need 400 interested kids to justify the program here. In Baytown, over 1200 have signed up, he said.

Goose Creek District has attracted attention from the state and nationally, with some of these programs, including the AVID program for advanced students.

The GC School Board was voted Region IV Board of the Year in the state.

O’Brien also spoke about school safety, an issue on everyone’s mind currently. He said that the last two bond issues had included money to “harden” the schools, providing $15 million for fencing, vestibules, cameras, and a Raptor ID system. In addition, 6 new police officers have been authorized, in addition to the 20 on the force, and 10 new security persons in addition to the 30 presently on-staff. Officers have annual active shooter training, he said, in conjunction with Baytown PD and others. Questioned by an audience member about arming the teachers or staff, in a so-called Marshal program, O’Brien said they feel their own officers provide a better and safer protection.

O’Brien said that the district is in strong financial condition, having recently refinanced the 2013 and 2019 bond issues, at a saving of $1.5 million.

In other business, Chamber director Jessica Woods confirmed that there would be the 65th Annual Highlands Jamboree this year, on Saturday, October 1 with a parade, kids pageant, and crafts and food vendors. The theme of the Jamboree will be “Fall In Love with Highlands.” A Miss Highlands Pageant is also planned this year.