The Holidays are a time to enjoy family time, and give thanks for your blessings. I will be doing both this year as I spend time with one of my daughters and her family, including her “Handy” husband Andy.

When they were giving out son-in-law prizes, I think I won the lottery. Andy is not only an accomplished father, husband, executive for Procter & Gamble, but he also likes to cook, especially big dinners for holidays. Getting to be a guest at his house is something we look forward to every year, and we anticipate that his meal will not only be tasty, but include a dish or two that he concocted from his own unique recipes.

You can see from the photograph that he can handle a huge assortment of dishes, most of which he prepared himself, and it’s a matter of pride that he doesn’t ask for help. Oh yes, we get to clean up afterwards, and eat leftovers for a few days (in spite of the message on his shirt), but what a feast to remember… again each year. 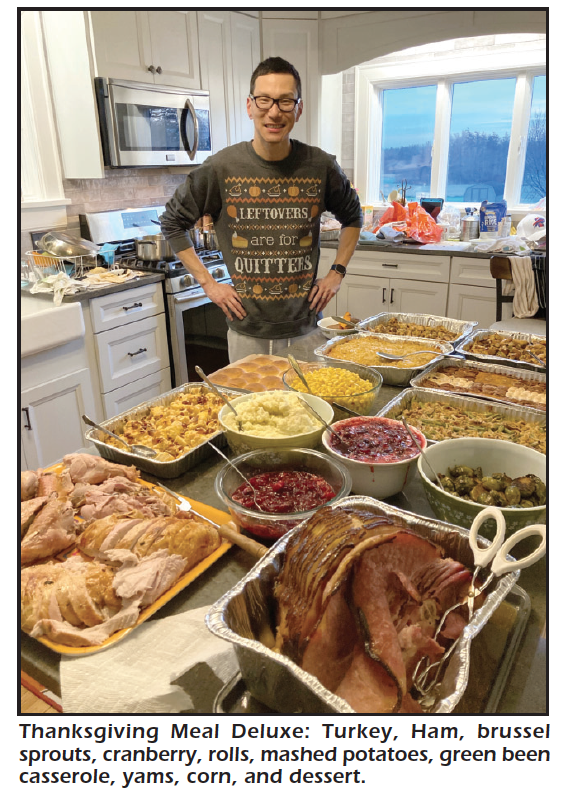 Actually, my story about Andy starts in 2003, when my wife and I drove our daughter Kristan to her first day at college, Carnegie Mellon in Pittsburgh. When we arrived at her assigned dorm, New House, we were met at the front door by the RA (Resident Assistant), a friendly and cheerful young man who was a student in the economics department. He made my daughter feel welcome, and helped get her established in her room. That was day one at college. But over the next four years, we heard more and more about Andy, for it seems that these two were destined to help each other for a long time.

Andy was writing a book, among other endeavors of this ambitious young man, and our daughter turned out to be a big help in the writing and editing, and even became one of the characters in the book. The title of the book is “New House 5” and is about “How a Dorm becomes a Home.” Like a Hollywood movie, the two of them formed a relationship that went far beyond the dormitory, and after graduation they moved together to Cincinnati, where Andy works for Procter & Gamble. They now have two children and it all started with a friendly greeting at the front door of a dormitory. 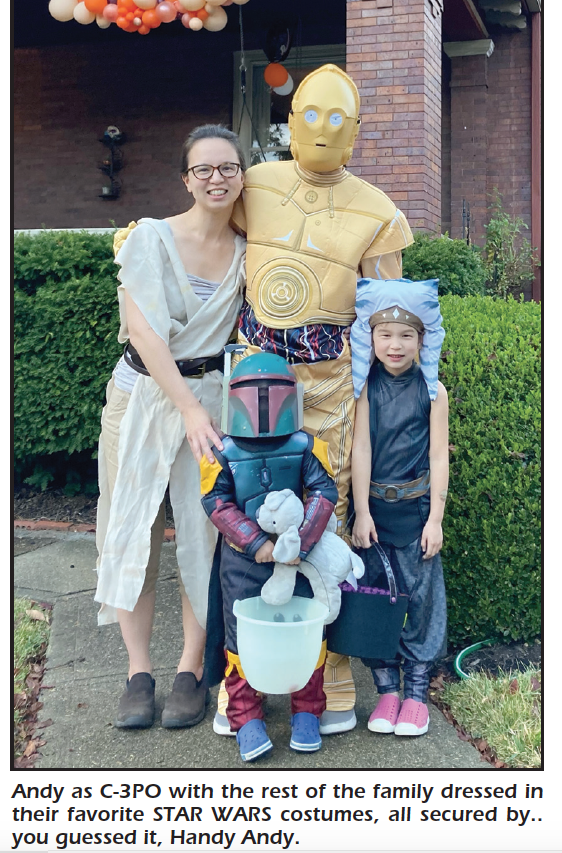 Andy has turned out to be “Handy” is so many other ways. Have a party, and he will make the costumes, furnish the games, and make the snacks. Visit his house, and he will have a Welcome Basket ready for you, with gifts, toiletries, and other thoughtful tokens. Have a Halloween night out, and he will arrange to get the costumes to your theme…. Just see the photo of the Star Wars characters the family chose this year.