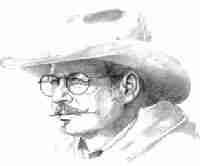 I wish I could draw a good picture, cause I feel like that cowboy with his hat soakin wet and down around his ears and his moustache drooping and his raincoat doin little good. Theres an image for ya!
Well, the shindig in George West went on in spite of a good soakin there too. However, the place was packed. The audiences were there for the storytelling and poetry, and they werent disappointed! Im goin to remind you all that the show, A Cowboy True is coming to the San Jacinto College North Campus February 7, 8, 9. Plan ahead and dont miss out!

If you dont understand it, ask a cowboy!

The politicians are in a feeding frenzy, now that were on the last day. I had one call me and ask if I was goin to vote and I said I was plannin on it, if I could get to the polls. He asked if I needed a ride. I laughed and said I would probably need an airboat. He didnt miss a beat and said he would have one come by at my convenience, if needed! Wow, did I feel special!
I had someone who attended a rodeo over at Liberty last week or so ask me to speak to whoever was in charge of the rodeo. It seems that a couple of cowboys in the wild steer milking (dont try to figure that one out!), roped their steer to the ground and proceeded to kick the poor steer in the head and ribs repeatedly to try and get him back up. This behavior on the part of these so-called cowboys was totally uncalled for and was not stopped by the rodeo staff. Ive been around rodeos all my life, so I know how things are done. But this treatment was brutal and should have been stopped and the cowboys disqualified. It was not stopped.
There is no excuse for this type treatment of rodeo stock. This behavior is what gives ammunition to the animal rights activists to try and stop rodeos. Shame on the rodeo committee in Liberty who allowed this to happen! Shame!
On a brighter note, I encourage every one of you to take the time to vote Tuesday for the candidate of your choice, even if you are wrong! Seriously, VOTE. It is your duty as Americans and Texans.
There are two sides to every political debate, yours and stupids! Remember, if you cant say something nice about someone, then come sit by me (and whisper in my ear)!
By the way, I saw a couple of Crosby folks in George West on Saturday and they said they read Horsefeathers! That makes sixteen people Ive found who read my column! Coool!
Im feelin a little lonesome lately. If you see me somewhere, say howdy. I need to know you all are out there! I threw a pity party, and no one showed up, so Im goin to quit doing that!
Ill let you shut the gate on your way out and remind you to hug a politician tomorrownaw, save your hugs for those you love! till we meet again, Happy Trails, Lloyd