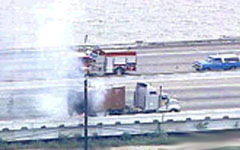 HIGHLANDS– A smoky and stubborn fire that started in the tire well of a semi, hauling a cargo container, threatened motorists and nearby businesses Tuesday, and caused authorities to shut down Eastbound I-10 at the San Jacinto River for almost 6 hours.
The fire spread from the tires to the wooden floor of the flatbed trailer, and then consumed part of the metal container and its contents, according to Chief Harvey Little of the Highlands Fire Department.

Responding first to the fire, Highlands soon had help from Channelview and eventually Houstons HAZMAT trucks. The container had just come from the Rohm & Haas plant in Deer Park, and was loaded with barrels of glacial methylacrylic acid. One of these barrels caught fire, and the result was a toxic cloud that threatened humans nearby, including the firefighters.

Firefighters used water from their tank truck to cool the fire, and eventually douse the flames. However, by that time the acid has spilled over the roadway and released gases into the air, and it was not safe for motorists or emergency personnel. Therefore the eastbound lanes were shut down until the spill could be contained and cleaned up, and eventually a crane was called to the location to life the remains of the container onto another truck, and remove it to a safe location.

This remedial process lasted until almost 5 pm in the afternoon, and tied up traffic for as much as eight miles at the worst condition. Detours were announced by local radio stations, and a traffic jam on US90 near Crosby ensued, with side roads such as FM2100, FM1942, and Crosby-Lynchburg Road clogged for hours.

Authorities did not have a cause for the fire, but fire inspectors were considering possible locked brakes or a leak from hydraulic fluid as conditions that could have contributed. No injuries to the driver or firefighters was reported.