Crosby gets the Blues 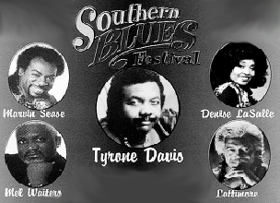 CROSBY  One of the largest Blues festivals in the world comes to Crosby May 3, featuring nine of the leading blues artists in the country.

This is the fourth year in which Across the Board Entertainment and Radio One Inc., have hosted a Blues festival at the Crosby Fairgrounds. This year, Budweiser The King of Beers is the Title Sponsor. The Budweiser Southern Blues Festival is to be one of many nationally successful musical events sponsored by the company and this local venture has been found appealing to the entire family.

Previously, The Southern Blues Festival was the most attended concert ever under the roof of the Rock’n C Arena. Small wonder considering headliners like Marvin Sease and Tyrone Davis are integral to the venture.

Traditional blues connoisseurs can find few better than Lattimore to provide the finest in wrenching catharsis.

That is the essence of Blues, catharsis; purifying or figurative cleansing of the emotions, especially sadness, described by Aristotle as an effect of tragic drama on its audience. The music form is release of emotional tension, as after an overwhelming experience, that restores or refreshes the spirit after having cascaded through the emotion into the other side.

According to Steve Delasbour President of Across the Board Entertainment, The Budweiser Southern Blues Festival is the occasion to connect your soul, and body on a musical beat, beginning with the nodding of your head to the stomping of your feet. Your fingers start popping and hips begin to move, suddenly you realize you are in a totally different groove. Your thirst will be quenched with numerous beverages, wet and cold, and your appetite thoroughly satisfied by a variety of foods sold. You will be stimulated by what you hear and see, and your spirit will take flight and be set free.

Mel Waiters brings an especially spiritual tone with his brand of Blues. Waiters has great range and directs great energy into the re-telling of powerful drama from personal experience.

For the first time in Crosby, Pat Brown will bring her ringing coloratura, packing the might of a Billie Holiday. Representing other of the dynamic impact of the Blues Diva, an internationally celebrated contribution, are Cynthia Walker with Denise LaSalle in mezzo-soprano.

Patrick Green and Floyd Taylor ring in with strong voice and heavy bands playing in harmony both Soul as well as Rhythm and Blues Music.

In total plans are for 12 hours of performance, fun, a variety of food, and beverages. The festival is to be a (BYOB) affair in which only plastic liquor bottles are allowed. No beer, water, food, soda or ice will enter the fairgrounds. No coolers, video cameras, or glass containers will be allowed.

Ticketmasters has the tickets, additional information can be found on the World Wide Web by logging on to www.atbe.net, or www.kmjg.com. The festival information line can be reached at 281-471-5060.