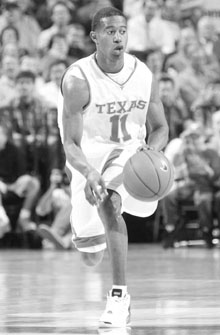 BAYTOWN– This year’s top college player T.J. Ford of the University of Texas Longhorns, will meet fans on April 26, prior to being honored at a fund-raiser dinner hosted by the Baytown and Bay Area Texas Exes alumni association.

Ford will be at the Baytown Historical Museum at 2 p.m. to meet fans and sign autographs. Then, at 6:30 p.m. he will be at the Goose Creek Country Club for the Texas Exes Annual Scholarship Fundraiser. Tickets for the fundraiser are available from Brennon Marsh, at Southwest Bank in Baytown.

Returning to the area will be a homecoming for Ford, who grew up in Highlands. The son of two Sterling High graduates, Ford began his education at B.P. Hopper, where he attended first and second grade.

Ford then began playing basketball at Highlands Elementary and later Highlands Junior School, where he finished the eighth grade in 1997.

Sterling High missed out on Ford, when his parents moved to Ford Bend and he was enrolled in Willowridge High School. While at Willowridge, he led the team to two state championships, including a number two ranking in the nation.

After signing with UT-Austin, Ford made an immediate impact breaking seven school records for freshmen.

Ford continued to dominate college basketball in his sophomore year as well, as he lead the nation in scoring with 15 points per game. This accomplishment, along with others, earned him the Naismith Collegiate National Player of the Year Award and the John Wooden Collegiate National Player of the Year Award. For a player to win both honors is almost unheard of in today’s game.

This year, Ford also took the University of Texas to their first final four appearance in 56 years.