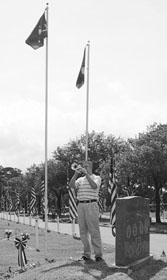 This year, perceiving a similar injustice in Dayton, Anselmo aided members of the Liberty Veterans of Foreign Wars Post #562 and the local American Legion Post in forming their own protest in front of the Dayton ISD Administration Building.

According to the DISD school calendar, which was approved by the board of trustees in January 2002, Memorial Day was set aside as a bad weather day. Greg Hayman, assistant superintendent of the district, said that in the fall, the school district was forced to close its campuses under threat of a hurricane, which eventually turned away from the area. In order to get the 180 days of instruction mandated by the state, he said, the district had to use May 26 as an instruction day.

Anselmo said that when he heard that Dayton would be holding classes, he attempted to contact the superintendent, Nancy Fuller, twice. Eventually, he said, he heard back from her and she told him that while students would be in class they will be and have been taught the meaning behind Memorial Day.

Despite the efforts by the school district to offer an educational alternative to releasing students, Anselmo said that it wasnt good enough and that students should not have to attend class on Memorial Day.

Anselmo said that a successful protest in Crosby last year inspired State Senator John Whitmire of Houston to file legislation that would prohibit schools from holding class on Memorial Day.

This legislation, Anselmo said, has passed both houses and is awaiting the governors signature to make it law. Hayman said that it is ironic that there were two school districts within Whitmires 15th Senatorial District who chose to classify Memorial Day as a bad weather day and could have been forced to hold classes.

Dayton was not the only local school district to hold classes on Memorial Day this year. Liberty ISD also held classes. Les Wylie, commander of the Liberty VFW, said that they did not plan to protest in Liberty because they did not have enough people available.

While classes were held in Dayton Monday, it was not business as usual. At 9:30 a.m. students from every campus, along with parents and community members gathered at Bronco Stadium for a Memorial Day Celebration. This celebration included a performance by the Wilson Junior High Band, a recognition of Dayton veterans and reading of student essays dealing with patriotism.