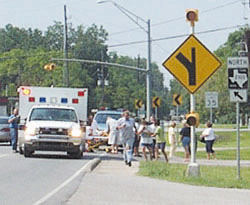 CROSBY  The site of the first fatal automobile accident in Crosby, the Y from Main St. to First St., was the scene of an accident involving a 13 year old girl on a scooter and a van on June 19.

The 13 year old was treated and released by Friday morning with some damage to her leg. The estimated speed of the collision was about 12 miles per hour on impact, according to authorities.

The wreck happened in the same location as decades ago a T-Model Ford rolled over trapping a man and his wife inside as the T-Model burst into flames.

The Crosby / Huffman Chamber of Commerce asked TXDoT to straighten the curve as a safety measure three years ago. TXDoT responded with a plan to make the curve less sever and to put in an overpass at the railroad crossing at FM 2100.