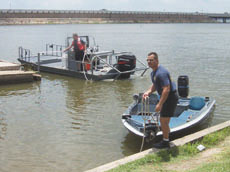 HUFFMAN  Three men set out to fish from Lake Houston Marina at about 9:20 p.m. on June 22, only one would survive the brief, tragic misadventure.

Witnesses say the trio scurried out into twilight with fishing equipment and fresh minnows but they were calling for help shortly thereafter.

Although the Houston Lake Patrol responded when informed of the calls for help, critical time would pass before the boat was found.

Lack of boating safety seemed to be a factor. The Houston Lake Patrol found the boat and marked it with a buoy shortly after 10:00 p.m. but it did not have the bottom drain plug in place. There were no life jackets aboard. Family members informed Houston Police that it was the second time the brothers had used the boat.

Houston Lake Patrol determined that the boat must have been swamped with water when the front end came down as it came to rest and then it capsized.

Jessica Escobar was working at Lake Houston Marina the night of the tragedy, she said, It just seems so ironic, we keep telling people they need to be well prepared before they go on a fishing trip especially if they don’t know the lake. If they had checked out their boat they could have known they didn’t have the plug in place. If they had life jackets, that might have saved them. If they had swam northeast toward the trees they would have been swimming with the current and after about 10 minutes or so they would have been walking to shore on a sandy bottom. They obviously were swimming eastward toward the park lights and that was against the current. This should be a warning to everyone to ask for information before going out, especially at night.

Houston Lake Patrol estimates the sole survivor swam at least 200 yards against the wind from a location northwest of the McKay Bridge. The survivor reached a private dock in Huffman and telephoned for help.