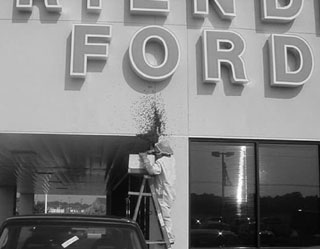 Jeremy Favors of Dayton gathers a swarm of bees from the canopy of Friendly Ford in Crosby on Monday, August 11. A swarm of honey bees apparently heard of sweet deals at the Crosby dealership and came to nest.

Wesly Johnson, manager of the dealership, says I was a little dismayed trying to get this situation cleared up without hurting the bees. I called a beekeeper supply store and was told they didnt know anybody that could get the bees. Business must really be slow there. Finally, I called some previous customers from Dayton and Jeremy came right out and trapped the bees in a special box with sugar in the bottom. According to Jeremy, Ill buy a queen and start a new hive. We already have two at the farm. Its strange, the bees let some people deal with them and not others. Wear any perfume or even deodorant that smells at all like flowers  you could be in trouble.