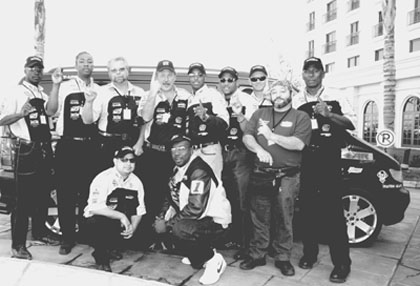 Highlands Kawasaki  Bear Engineering, USA -South Africa, has returned home from a victorious racing debut one third a world away.

The event was the South African Dragbike Tour held at the posh Gosforth Park Raceway and Ceasars Hotel. The facility combines a 5 star luxury hotel with SASCAR racing on an oval track, motorcross, and dragracing into a £10,000,000 facility, valued conservatively at about $7.25 Million in U.S. Currency.

Keith Coble, Highlands Tractor Kawasaki President, described his overseas winning adventure, Race enthusiasts build this marvelous racing facility some 6,600 feet above sealevel, here we are about 33 feet above sealevel, so my biggest challenge going in was to be able to make my bikes run like they run here in that thin air. I was fortunate enough to make some changes when we got there and got my horsepower. Its a virgin track, so there is no rubber down yet. So traction was an issue. I knew that it was going to be a question of who could hook their bikes up to the track. I had six time world champion, Rick Gadson. I had Texas State Champion, Jeff Peck. I had Gilbert Coronado, Brian Dunham, Troy Jackson, and we had some great sponsors, Hewett Packard, Ceasars Resort, Westbank Raceway, and many others too numerous to list. The people over there were really enthusiastic about us coming to race, I think the previous record in the quarter mile was 8.33 seconds and we run in the sevens here.

So how did Coble and company win?

We ran an 8.291. It was really a serious challenge to make the adjustments. In my opinion, we won the race two or three days before the event because we were able to make the changes. I went in blind, nothing that we do here was the same there. We werent able to use the same fuel, all of our electrical equipment here runs on 110 to 112 volts, over there its about 240 volts. I had some big arguments with my mechanics and finally told them who was boss and what we should do, eventually we decided what we were going to do. It seems I made the right calls.

Jack Scicca, the lead mechanic for the team, has developed numerous innovations in horsepower management according to team manager Coble and international observers. According to Scicca, We made a bunch of changes on each bike after every pass just trying to stay up with track conditions. I was really concerned that Keith was going to run the bikes to hot or the tire to flat but it turned out better than I expected.

Ricky Gadson is able to come back from a pass and communicate with the mechanics about what the bike was doing. Ricky, Jack Scicca and I worked really well together. We actually were pulling horsepower out of the bikes to hook the tires to the track. We were able to establish this record with about half the horsepower my bike possesses. I had four of my bikes over there and Pierre Labuschagne of Bear Racing South Africa had four bikes racing and we ended up with seven of the top eight positions. explains Coble.

What was the competition running? The previous record holder was a 1700cc Hayabusa turbo shooting nitrous, he made it through the entire field without having to run against any of our guys until the final. said Coble with a shrug, indicating the odds on that pairing was unlikely.

The winner of the event, Ricky Gadson elaborated on the event, This new track is like nothing you have ever seen before, but the bad part about it is that we were the first event to go down the strip, which meant there was no rubber at all on the track. 

Wynns mixed up some traction compound called Snake Bite to take the place of VHT, but all it did was clogged up the tubing on the sprayer machine, and left us without a way to prep the track unless it is done by hand. The track was sprayed by hand, with no way of etching it in unless we do it with our tires, this is why alot of guys fell, because hitting the front brakes on it was like hitting ice.  said Gadson of the traction problem.

Before my arrival in South Africa, the Highlands Texas team arrived to do testing and could not hook up at all posting best times of 8.80’s which over here is nothing to be ashamed of, remembering that is only 2 other Shootout bikes that ever went 8’s in South Africa. Upon further testing on the day after I arrived, they manage to run 8.67 (Jeff Peck) 8.80’s for Brian Dunham (ZX11 Turbo) 8.80’s for Gilbert Coronado (Mr Turbo ZRX1100). We tested the Bear ZX12 nitrous bike and it ran 8.70 spinning the tire the whole way, while the South African KCR team came out with an untested new engine, and turbo combination on their Hayabusa (Beautiful I must add) and promptly ran a tire spinning 8.54 @ 288kph, showing that their one bike was more than ready for the whole Bear Racing led US arsenal, full of hired hitmen.  smiles Gadson.

The Highlands Kawasaki Bear Engineering Team decided to put Gadson on the Muzzy Built ZRXTurbo, and put the Texas Champ on the Bear Nitrous bike, for the best chances of winning the race but more importantly setting a new South African national record held by the Hayabusa at 8.33. Race day opened with 3 crashes because of the cold track. Everyone spun through the practice round. Gadson ran 8.74 on the Z-rex, and the KCR team posting low ET with a power managing 8.55.

When the scoreboards lit up again it would read a legit 8.29, and all 50,000 South African fan went into a frenzy. Next round the team backed it up with an 8.30, followed by 8.32. The Bear racing bike ran a tire spinning best of 8.75 with Peck aboard.

When the finals came it was the Highlands Z-Rex with low ET of every round and lane choice, the KCR guys were having problems with traction also and could only run a best of 8.44 in eliminations.

In the finals both bikes left well but the Hayabusa of KCR had a shifting problem and coasted through the lights, while Gadson ran consistent.

Answering what gave him the final edge, Coble said, It was a very educational experience to work with Ricky Gadson, there are a lot of riders that are very talented riders but Ricky knows the mechanics of the bike. My mechanics Jack Scicca and Woody Philips had an unbelievable job ahead of them. At one time we had three blown turbos and fortunately a fan was an experience welder. Ive never had to have a turbo on the ground before but this race we had three on the ground at one time from running to much heat. Jack Scicca was graveyard serious, he came to race. In spite of having arguments with him about my fuel mix being too hot, he just stepped up and got busy doing what ever it took to get the job done.

Coble, Gadson and team were on radio and television all over South Africa. Coble reminisced South Africa is a beautiful nation, I think there is a lot of wealth there. Racing is a really big deal. We never put as many fans in the stands as they do there.

There are 6500 VIP seats in Gosforth, they can serve 32,000 plates of food. In two and a half days they went through two and a half tons of chips, seven or eight tons of ice. I went over for three weeks, about two weeks before the racers. After the races, the sponsors took me on a hunting trip. If youve never seen a real live lion, once you see them feed youll know they are some bad boys. The temperature over there was forties at night and sixties in the day. Its winter over there and they get the rain during the summer when they need it rarely in winter. When I got back here I nearly died. 

Coble finalized the interview with, I cant say enough about how good my sponsors were to me, Hewett Packard, Bear Engineering-Bear Racing, my new partners in this team, Westbank Racing, Ceasars, Biker Lifestyle Magazine all the others too numerous to mention were as wonderful as could be. It cost them about $125,000 to fly us over there and that was just to get us there with the bikes, after that, Craftsman Tools furnished us with the tools we needed.