Major accident on FM2100 sends two to hospital by LifeFlight 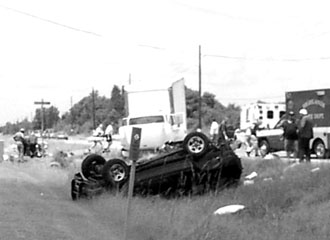 CROSBY  A horrific accident involving two passenger cars and a panel truck, drew two Lifeflight Helicopters to the Heathergate Intersection of FM 2100 at about 1:30 P.M. on Monday.

This marks the second time in as many weeks that there has been an accident near this intersection, although investigators can find no reason to attribute road factors to the wrecks. All three of the drivers were taken to hospitals. Two, who were apparently critically injured, went by Lifeflight helicopters while the driver of the panel truck was transported by ambulance.

According to Harris County Sheriffs Traffic Investigators, John Gilbert, 25, was apparently driving north on FM 2100 in his 2003 Monte Carlo on August 4. For reasons unknown, he crossed the center line, investigators determined. The Crosby resident apparently continued to travel North for a short distance in the Southbound lane until his car collided head-on with a panel truck at the trucks front bumper toward the left side.

The impact hurled Gilberts Monte Carlo counterclockwise and into the path of Fabio Berrios 1994 Mazda Navajo, an SUV. Apparently, Berrio, a Kingwood resident, had been close behind the panel truck at the time of the accident. Evidence indicates that Berrio attempted to avoid the wreck by veering into the Northbound lane and struck the left rear of the Monte Carlo as it ricochetted off the panel truck.

The SUV following this impact was turned right and rolled into the ditch in front of the Community Baptist Church. The SUV rolled over onto its roof, coming to rest facing West from the ditch and onto the churchs lawn.