Public turns out to support YMCA in Crosby 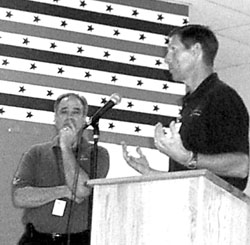 CROSBY  About 46 people attended a town meeting on Thursday, July 31, sponsored by the Crosby/Huffman Chamber of Commerce at Newport Elementary School about the potential for bring a YMCA program to Crosby.

The meeting was opened by Rev. Dr. Larry Koslovsky of Crosby Brethren Church and Doug Earle, Vice President of Operation and Steve Gimenez, Executive Director of the Wendel D. Ley YMCA made presentations.

Koslovsky would explain later, We [the C/HCC] are putting on this meeting to introduce the possibilities of a YMCA. We dont feel it is the responsibility of the Chamber to encourage or discourage things like this.

According to Mr. Earle, the YMCA is founded upon John 17:21 That we may all be one. with a mission to put Judeo-Christian principles into practice through programs that build healthy spirit, mind and body for all.

Mr. Earle proposed three models of YMCA starting programs in a community. The first model is based on existing YMCA Chapters to start programs at the behest of residents with the ultimate goal of fund-raising for buildings to begin as the programs and memberships grow. The second model is like that of Liberty County, asking that programs be started if a sufficient amount of money can be raised to support the programs. Earle adds that Liberty County has netted $300,000 from such a program. The third model, he called the Mike Godsey Model, We want to build YMCA in our community last week, what will it take to get it done?

Quipped Earle, If you can get someone to donate 15 acres of land, and someone to write a check for $5 million dollars  we can start almost immediately. But you never know until you ask the question what the answers will be.

Earle moved on distinguish YMCA programs from other programs citing their sports programs gets every child a chance to play. Citing the overall philosophy as serving the entire community, being open to everyone, no one is turned away due to inability to pay and being a charitable not-for-profit organization. Core programs were listed as Youth Sports, Parent-Child activities, After School Child Care, Camping, Aquatics, Teen Leadership, Wellness, and Active Older Adults programs.

Pat McPhee, a member of the advisory board for the YMCA in Channelview, informed attendants that the YMCA is the largest employer of teenages in the country. He also asked the speakers to expound on daycare programs.

Steve Gimenez indicates that the first step in starting a YMCA program in the area is to inform the YMCA staff what the community is looking for. Gimenez expounded The YMCA has a program for everyone in the country and financial assistance is available.

Any Hoehner asked if there is a need for an after school program and no existing facility would they be put on a waiting list?

The response was that family memberships generally run $40 to $50 while individual adult memberships run about $36. Membership discounts on programs get members Family Nights, Aerobics, Child Watch or baby-sitting while one works out. There is a sliding fee scale for members.

Attendants learned that their are possibilities for using existing facilities for programs.

Velma Ellison asked, Are there additional fees for other programs?

There is generally a user fee for other activities and facility usage, was the response.

Luke Morgan of Millennium Reconditioning Services Inc. asked questions concerned with finance of a building. Apparently, YMCA gets total financing of a building before construction is begun.

Irene Powers asked about the requirements for after school programs and learned that their are 237 such programs in the Greater Houston Area and all that is needed is that sufficient members commit to start the program, required is about 20 to 25 kids in need of services. Of about 140 children at a school some 20 to 25 have to participate and to make the program viable, the schools has to embrace the idea.

Anne Prokosch asked what happens if there are competitive facilities, can the YMCA interface with competition? Well, the answer was yes. There was mention of membership fee reduction for competitors.

Most attendants resolved to hold further discussion at a YMCA follow-up meeting at the Crosby Brethren Church on Tuesday, August 5.