Huffman finally gets action from City of Houston Water 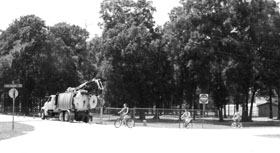 HUFFMAN  Lakewood Heights residents are at last getting some work done on yellow drinking water and a broken sanitary sewer line from their provider, the City of Houston.

The residents have been complaining of extremely bad City of Houston water for at least the last six months in the subdivision. Residents offer as proof pots and pans of collected water that have a yellow, metallic appearing residue once the water evaporated.

Jack Ervin, director of Maintenance at Huffman ISD acknowledged that Huffman schools on Lake Houston Parkway, such as Ben Bowen Elementary are hooked up to City of Houston Water lines but indicates, We havent seen the discoloration in school water that the residents have in the neighborhoods. If I had, I would have been even more aggressive with the City than I have been.

Ervin said, Addie Wiseman came out to a public meeting held at the Lakewood Heights Civic Club and talked to residents about discoloration in the water. She went back to City Council Tuesday was a week-ago at a Pop-Off Session and offered a drink of awful looking water to the Mayor and then offered some to her colleagues. That little visit from Addie got visits from the Deputy Director of Public Works to the sewer line that has broken on Huffman Eastgate Rd., our drainage problems at the school, and to check on problems with city water over here. If you come out today you will see a lot of Houston City Trucks in the Lakewood Subdivision.

Councilwoman Addie Wiseman said, Its the same story from the City of Houston all the time. For two years now the people of Huffman had to deal with atrocious water not to mention a broken sewer line. So, I had to drag out the public works department people out there to see what people were dealing with that really is part of the City of Houston. The problem was that when I would bring up problems in Huffman, the relevant people would say Well, Huffman isnt part of the City. I hope Ive cleared up that notion now.

Jack Ervin had met with former Mayor Lanier to come to an understanding of the needs of the crossover of Huffman East gate Rd. Sanitary Sewer Line to East Lake Houston Parkway schools. The school districts must interact with three distinct jurisdictions over roadway, the Texas Dept. of Transportation, Harris County and the City of Houston on various projects.

Ervin said, We get a lot of support from Sally Wegmans Office at TXDoT. We work well with Jerry Eversoles people. Addie Wiseman has now spent lots of time meeting with us on our concerns with the City of Houston.

Thats just it, there is a lack of planning and coordination in the Citys approach to working on projects that effects peoples lives. responded Wiseman to reporter inquiries into City of Houston priorities.

The ruptured sanitary sewer line is a 13 inch main on Huffman-Eastgate that broke Nov. 3, Ervins written co-respondence did not receive a response until Feb. 10, stating that items on the list would be taken care of in 180 days. Ervin sees the time from Nov. 3 until July as a slow turn around. On Wednesday, July 23, the Public Works Director came out to work with residents and view local problems.