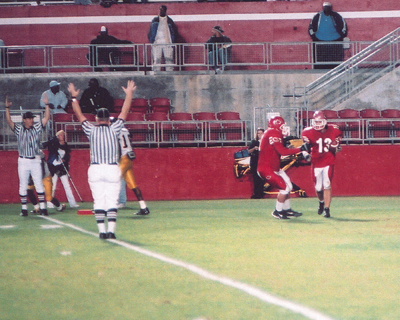 By BOBBY HORN JR
HOUSTONTo borrow a line from Charles Dickens, Fridays 69-14 loss to the 12-0 LaMarque Cougars was the best of times and the worse of times for the Crosby Cougars.
While the team came up on the down side of the scoreboard, they were able to celebrate their teams name going into the record books.
Phillip Beck added his name to the state record books as his 11 catches broke the all time record for most catches in a season. Beck ended the season with 124 catches, two better than the previous record holder Josh Whaltley. In addition, Beck has collected 2,202 receiving yards this year, which places him fifth all-time for single season receiving.

Going into the game, Beck said that while aware of the record he was wasnt sure that he would make it.
I didnt think it was reachable. Theyre (LaMarque) real quick and real big, he said.
Beck said that during the game he didnt keep track of his catches, but was aware that others were. The coaches kept up with it and I think the crowd knew too.
The record-breaking catch came in the fourth quarter. We went into the huddle and he (Crosby Quarterback Kellen Haynes) said O.K. Beck lets break that record.
Beck attributed his record to the play of the offensive line. I have to take my hat off to them. They did a great job. Its not my record its a team record.
Crosby, who went into the game underdogs, found themselves in a hole early as LaMarque opened the game with a pair of touchdown passes in the first quarter.
The Cougars continued their scoring in the second quarter building up a 28-point lead before Crosby could get onto the scoreboard.
Crosby posted their first touchdown four and half minutes into the second quarter when Haynes hit Beck with a 27 yard pass.
Two minutes later Crosby was back in the endzone off a 30-yard pass from Haynes to Beck.
This is all the Cougars could manage in the scoring column, as LaMarque would answer with four more touchdowns over the remaining two and a half quarters.
For the game, Haynes completed 23 of 43 passes for 278 yards. He also threw four interceptions. Beck was the recipient of 219 of those yards. Haynes was also the teams leading rusher with 21 yards on 12 carries.
The Cougars end their season with an 8-4 record. The team placed second in district, rolling off a 4-1 record with their only loss coming the last week of the season against district champs Dayton, who also lost their playoff bid this week. The Cougars had the most effective offense in district this year, posting an average of 430.3 yards per game. They also had the second best pass defense in district, allowing an average of 85 yards per game.