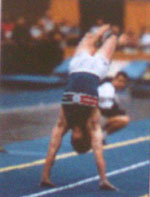 CROSBY  The first meet to determine who will represent the United States in the Olympics in the newest Olympic category will be held here this month.

On January 24, Texas Sports Ranch will host a regional Trampoline & Tumbling event that is the first of several meets to determine who will go on to qualify for the Nationals in Tampa, Florida.

Many of the athletes that went to the world competition in Germany last August will be on hand competing to retain their shot at competing internationally. These include: Jose Hernandez of Boerne, Texas, who competed in Hannover, Germany in 2003 and Odense, Denmark in 2001 both events in Power Tumbling; Jaime Strandmark of Houston trains at Texas Sports Ranch; she will present awards. Jamie Strandmark works for NASAs Johnson Space Center for the Shuttle and International Space Station Planning Group and plans to be an astronaut one day. Jamie went to Hannover last August, Ostend, Belgium for the World Cup and Oakville, Ontario for the Canadian Cup in 2003 for Trampoline.

Power Tumbling competition starts early in January and includes athletes age 5 and up to determine who will make up the national team.

Power Tumbling takes place on elevated spring runways to enable tumblers to propel higher than a basketball goal as they demonstrate speed, strenght and skill while executing a series of acrobatic maneuvers. Top-level contenders perform explosive somersaults with multiple flips and twists.

Trampoline competition is done on equipment that can propel an athlete 30 feet into the air during performances. A graceful array of double, triple and twisting somersaults can be expected in competition during two competitive routines of 10 skills.

Synchronized Trampoline adds the element of precision timing between two atheletes using two trampolines. It has been dubbed the most artistic event in sport as two perform 10 skill routines in mirror image.

Double Mini-Trampoline combines horizontal run of tumbling with verticle rebound of trampoline. After a short run, the athlete jumps onto a small two-level trampoline to perform a rebound trick immediately followed by a dismount onto a landing mat. Double Mini is simular to springboard diving, using a mat instead of water.