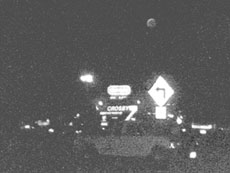 CROSBY — Anyone driving a vehicle, no matter how safe or alertly they think they drive, can hit a pedestrian. That is a good incentive to drive the speed limit and as alertly as possible. Two Crosby men today agonize over having had such accidents on Sunday night, while a Crosby nine year old and a twenty eight year old Dayton man are, as this is being written, fighting for their lives.

Harris County ESD#5 Medics record the time as 6:21 p.m. at the corner of Sealander and Port-O-Call in Newport involving a red truck and a child on a bicycle. The other accident occurred at 8:44 p.m. at the 15,100 block of FM 2100, near the curve in FM 2100, involving a green 1994 Chevy Blazer and a pedestrian. Radio transmissions by emergency services called for immediate Lifeflight helicopter transport to Hermann Hospital due to the patients being, “critical at the scene.”

Witness accounts to Harris County Sheriff’s Dept. indicate that the earlier accident occurred when two boys on bicycles went through a stop sign and the red truck went over the first boy and the second hit the truck’s side.

Curt Ingram and a male passenger had been traveling on Sealander around 6:30 p.m. Ingram had about a month or two of school to go before finishing EMT training and did what he could for the injured boy, preventing others from moving him before medics arrived. Ingram was charged with D.W.I. by Harris County Sheriff’s Dept.

The boy was taken by Life Flight to Memorial Hermann Hospital, where he was listed in critical condition. As of Tuesday, his condition was reportedly stabilizing and was found to have a frontal contusion.

The second accident happened, according to witness accounts, when Jorge Perez of Dayton walked from the parking lot of Sam’s Grocery and Laundry in the Westbound direction into Main Street traffic. Glenroy Jack, 57, of Crosby was driving Northbound and stated he did not see Perez until he walked in front of his vehicle. Witnesses at the scene stated that an altercation between two people had precipitated the accident but no one presented details to deputies.

Mr. Jack was not charged in the incident but reportedly was visibly disturbed by the scene.
The call for help was made by a passerby that saw a body lying in the road.