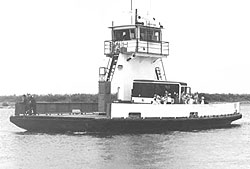 LYNCHBURG In an effort to fight rising operation costs, Harris County Commissioner Sylvia Garcia has cut back operating hours at the Lynchburg Ferry.

Beginning June 28, the ferry will be closed from 8:15 p.m. to 4:30 a.m., the equivalent of an 8-hour shift. The closure is expected to save the county approximately $200,000 a year says Mark Seegers, spokesman for Garcia. Seegers added that the employees who normally work that shift will be reassigned to other county jobs.

The decision to close the ferry follows a report requested by commissioners court last year which recommended the partial reduction in services as well as buying two new boats. At one time, commissioner were questioning the possibility of closing the ferry altogether, which prompted the report.

The cost of replacing the boats has been estimated at $2.5 million.

Last year, the ferry was closed for three months while the county spend $830,000 to repair and repaint the ferries, the William P. Hobby and Ross S. Sterling, as well as conduct repairs at the north and south landings.

Seegers said that by docking the two boats for eight hours a day they can extend their life until a decision about their future can be made.

By limiting the hours, the county is cutting off a main connection between Interstate 10 and Highway 225.

During the closure hours , Seegers said that there are three alternate routes that motorists can use to get from one freeway to the other: the Washburn Tunnel, the Beltway 8 toll bridge and the Fred Hartman Bridge.

According to workers, the closure will also help eliminate the problem of intoxicated drivers driving off the landings into the ship channel. Twice this year, cars have been driven into the channel with the driver later charged with DWI. Both incidents occurred during the time period in which the ferry will later bee closed. This most recent incident happened on June 11, when Ruben Sandoval, 28, drove his convertible into the channel just after 9:30 p.m.

A witness to the accident, Alberto Morales, dove into the water and rescued Sandovals 4 and 9-year old sons who were in the car. Sandoval was later arrested and charged with felony DWI.

The Lynchburg Ferry has been in operation since 1822. Harris County took over operation of the ferry in 1888.