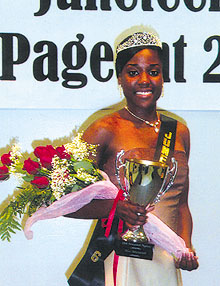 MCNAIR The McNair communitys nine-day Juneteenth Celebration continues this week with a series of nightly events held at the Edna Mae Washington Park and J.D. Walker Multi-Purpose Center. The celebration is being hosted by McNair Atomic Lodge #327. The celebration actually began on June 4, when the High Twelve Club hosted the Miss Juneteenth 2004 Pageant.

The theme of this years pageant was Passion of the Black Woman and was coordinated by Erica Nichols, a student at Texas State University.

At the the close of the pageant Blanchard, a 17-year old student at Robert E. Lee High School, was named Miss Juneteenth.

On June 12 and 13, Juneteenth plays were held at the community center. This was followed by an Apollo Night on June 15 and an Appreciation night on June 16.

The festivities continue June 17 with a Jazz Poetry Night at 7 p.m. and McNair Masonic Family and Friends Gospel Extravaganza on June 18 at 6:30 p.m.

On Saturday, June 19 there will be a parade, beginning at 10 a.m. The parade will begin at the community center and head west on Battlebell, later traveling on Thompson and Jones Road, back to Broad St. and north on Whiting to end at the center. After the parade there will be a celebration in the park with music, games, food and arts and crafts booths.

The parade will be preceded by a community breakfast at 7 a.m. On June 20, the festivities conclude with a church fellowship at 2 p.m.