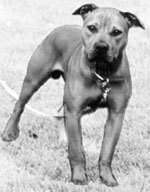 HIGHLANDS – Harris County Precinct 3 Constables deputies are on the look out for at least two men that allegedly take pit bulls from their local owners possibly for resale in much further south markets.

Two men were reportedly observed bestowing some rough treatment upon five pit bulls near the racetrack in Highlands.

A passerby allegedly bought one of the dogs from the men for $50 to keep it from the rough treatment. The dog purchased was said to be the most tame of the five.

According to the man that bought the dog, the men in possession of the dogs said they were just trying to sell them.

The Pit Bull Samaritan later noticed that the dog had a collar with a tag and returned it to the rightful owner on Grace Lane.

The men were described as black males driving a blue and grey primer old truck and a maroon car. Grace Lane residents said that they had observed the Maroon car driving slowly up and down Grace Lane.

The suspects are not wanted on charges at this time.

Residents are advised to keep special watch over their pets and call Precinct 3 Constable Deputies at 281-427-4791 if they observe any suspicious activity.