Crosby Volunteer Fire Dept.’s Chief Alan Kulak was on his way to church on Feb. 9 when he saw flames shooting from the roof of Apaseo Restaurant on FM 2100 at Kernohan. Apparently a ballast from neon trim lights caught fire to roof parts. Kulak and a quickly mounted crew battled the blaze with help from Highlands VFD to save the restaurant, which opened the next day. Kulak attributed the save to the efforts of the fire crews from Highlands and Crosby.

Also, as seen in this second picture, Crosby VFD & ESD#5 cooperate to rescue a driver from a two car accident on FM 2100 at Hare Rd. on Monday, Feb. 14. Fortunately, the swift actions of both rescue crews extracted the previous occupant of the red car to safety and on to the hospital with only minor injuries.

END_OF_DOCUMENT_TOKEN_TO_BE_REPLACED 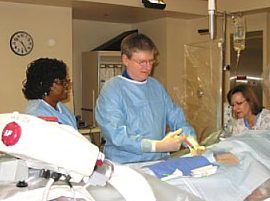 “This is a major step forward in cardiac care for an ever-growing population in the Baytown area,” said Randall Zarin, vice president of operations, who has directed construction of the center from the time of its groundbreaking May 2004.

The two new catheterization labs bring the cath lab total to four, with the existing labs to now be completely dedicated to interventional radiology and special procedures.

“The new cath labs are equipped with a state-of-the-art GE catheterization equipment and Digital ACS Network that gives our physicians and technologists the ability to view all X-rays and cardiology procedures electronically,” Zarin said. “We’re the only facility in the Methodist Hospital System with this capability.”

“SJMH is one of a few hospitals in the country that allow medical personnel to review radiology and cardiology images on one system,”
Zarin added.

END_OF_DOCUMENT_TOKEN_TO_BE_REPLACED 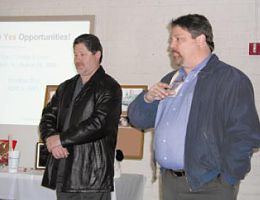 HIGHLANDS  Members of the Chamber of Commerce heard a presentation of the reasoning behind the proposed Bond sale that will be voted on April 2nd in the Goose Creek school district.

The talk was made by Gilbert Santana, chairman of the Political Action Committee, Mike Wilson, and Donald Dunn of Highlands. All of these were on the committee that has been working and meeting for 7 months to come up with a plan to meet the needs of the district as it grows. Also present at the Chamber luncheon were Superintendent Barbara Sultis, and Asst. Superintendent Dr. Toby York, as unofficial observers.

The total amount to be raised by the sale of bonds will come to $220 million new bonds, and $20 million that were authorized in a previous election but never sold, said Santana.

If all the bonds are sold and the money spent for facilities, it would mean a tax increase for the average home owner of $127.50 per year, assuming the appraised value of their house was $100,000.

Growth projections through the year 2010 indicate their will be an additional 2400 students in the district that must be accommodated. To meet this need, the committee proposes a new elementary and a replacement elementary. Also planned is a replacement for Highlands Junior School, construction of another junior school, and a new high school on a site at N. Main and Wallisville, that would serve the Highlands community.