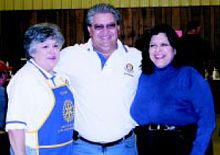 HIGHLANDS  The Rotary Club held their 30th annual Chili Feast last Saturday, and a large part of the community turned out for good fun, good chili, and the excitement of “almost” winning a new pick-up truck.

But one lucky ticketholder did get a new GMC truck. It was Mundy Garcia of Bay City, who learned of his good fortune from his sister, Rosie Rodriguez, on the telephone. It seems that Mundy was working that day, and missed some of the excitement that others enjoyed.

Rotary chili feast chairman Steve Miller reported that the event raised a net amount of about $36,000, that will be used for community projects throughout the year by the club. For the first time this year, the club had sponsors as well as raffles and ticket sales, so the income was higher than in previous years.

Miller said that the auctions raised almost $8,000, and the ticket sales about $50,000. Other income came from card draws, desert sales, and miscellaneous items.

The Rotary Club has about 25 members, and were aided in the execution of the event by the wives auxiliary, the Boy Scouts, and the Interact Club of Chinquapin School.

The auctioneer was Ken Garcia, and entertainment was provided by the Pic n Grin band. Congressman Ted Poe was on hand, and pulled the first ticket in the raffle. Also present were Constable Ken Jones, Judge Tony Polumbo, Judge Mike Parrott’s staff, and many other personalities of the community.

The major prize was a new GMC extended cab pick-up truck, but also given away were 11 other prizes during the drawing, ranging from TV sets to a complete computer set-up.