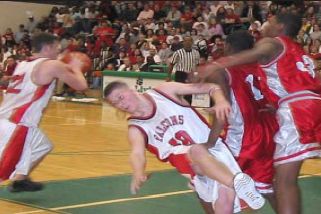 LIVINGSTON – The Huffman Falcons’ hopes of advancing to the regional tournament took a turn for the worse in the second half of their playoff game against Diboll, which resulted in a 67-46 loss Tuesday at Livingston Middle School.

Huffman, which advanced to the playoffs for the first time since 1979, ends its season at 20-10.

Diboll advances to play in the Region III Tournament this weekend and improves to 25-5.

Playing in front of a standing room only crowd, maybe it was good that some Huffman fans didn’t get to see the game in its later stages.

As spectators were nearing the entrance outside the facility, police were forced to ward fans away because the local fire marshal declared the building a fire hazard as a result of overcrowding.

The “lucky” fans had an opportunity to see District 23-3A champs Huffman fall behind 19-8 after one quarter but recovered in the second.

Diboll could only manage four second-half points — two by free throws and a lone basket. Still, the Lumberjacks were able to cling to a onepoint halftime lead.

In the second half was when the season caved in for the Falcons as they allowed 22 points in each of the third and fourth quarters.