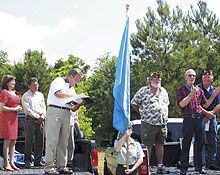 CROSBY — On May 20, Crosby resident, David McNerney, graciously accepted local recognition for having received the Congressional Medal of Honor near the Indian Shores Road cross street on FM 2100 by the Crosby VFW #9761, American Legion #658 and the Crosby/Huffman Chamber of Commerce.

This dedication of a sign (made by Lone Star Signs) was placed on land bestowed by James Lee, owner of the Shell Station there.

It seems appropriate to remember the great deeds of men that enable a republic to bestow the blessings of freedom to its residents, the reason for Memorial Day. McNerney a very private person was reluctant to attend the ceremony, according to all of Joe Anselmo, Don Guillory Commander Crosby VFW #658 and Tom Devlin of the VFW #9761. They had convinced McNerney that it would be too much fanfare.

Anselmo said to the veteran, “This is as little fanfare as we can muster.”

The nations most prestigious award was bestowed for McNerney’s service in the U.S. Army at Polei Doc, Republic of Vietnam on March 21, 1967, in keeping with the highest traditions of the U.S. Army.

In his own word, “I was not by myself in A Company. There were 108 of us on a helimount patrol, looking for an Alert Team, (Long Range Reconnaissance Patrol) that had gone missing. The next day they attacked and for eight hours we fought. We called in artillery, we had air support. We had all the good things that an infantrymen love — help. It didn’t work out too well for us, at the end of eight hours, twenty two were dead, forty were wounded. It was tough and fighting was still going on. You want to remember those 108 riflemen, young men of our country that were there and doing their job. I myself will never forget them. I think you should remember them, too.”

When asked one to one about how he had accomplished this given the incredible amount of enemy fire, McNerney said, “I never thought I would get it, never thought anything bad would happen to me while it was going on.”

Also expressing some reservations about the public attention, McNerney reveled that he did four tours in Vietnam, and joked, “No income taxes before reporters could ask what lead him to sign up for four times.”

The ceremony was organized and directed by Joe Anselmo for the Chamber and American Legion #658, invocation was by Pastor Richard Amador of Harvest Son Church. Huffman JROTC posted the colors and Barbara McPhee sang the Star Spangle Banner.

The event was highlighted by comments and reading of the Medal of Honor Citation from Don Guillory, Commander of Crosby American Legion #658. Not only were Precinct 3 Constable Deputies on hand to handle traffic, Constable Jones, himself and deputies were in attendance. State Representative Joe Crabb was represented by Phillip Ivy and Congressman Ted Poe by Amy Blanchett, who bestowed a congratulations.

According to the certificate for the Medal of Honor, McNerney’s actions involved establishing defensive perimeters with his unit while under attack by a battalion of North Vietnamese regulars. He slew several enemy at close range, was wounded by a grenade.

Persisting although injured by destroying a machine gun nest, he assumed command of the company when his commander was slain, and adjusted artillery fire to within 20 meters to fend of superior numbers of assaulting enemy. McNerney was exposed at all times to heavy enemy fire during the incident.

Calling in air support, the company marked their position by smoke grenades. When those smoke grenades depleted, McNerney marked their position in a nearby clearing to signal air support, then he climbed a tree and tied the company’s panel to the highest branches. During the firefight, McNerney readjusted the companys position, encouraged defenders and checked the wounded. Later, when the assault had slackened it was discovered that large trees must be removed to evacuate the wounded. McNerney crawled from the relative safety of the defensive position to take explosives from abandoned rucksacks and drew exceptional enemy fire. McNerney in spite of painful injury did not leave his unit until a new commander arrived the following day.