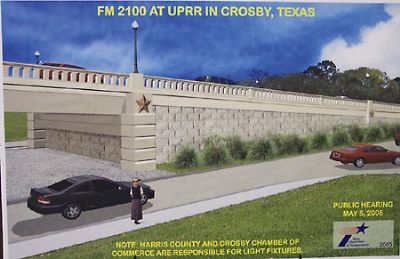 CROSBY – The Texas Department of Transportation (TXDoT) presented a public hearing at the Crosby High School Commons to exhibit illustrations, and engineering drawing, present their findings then hear comments from the public concerning an overpass at the railroad pass on May 5. About 300 total residents of Crosby attended the viewing, presentation, or public comment phases. Six individuals (representing their opinions) made comments about the designs, several made written comments. The subjected area of FM 2100 is from before the curve all the way to South Diamondhead Boulevard.

The subject crossing is now a four lane crossing at ground level with gate and flashing light warning. TXDoT indicates the reason their experts decided to install an overpass at the location are primarily based on the Crosby/Huffman Chamber of Commerce request to “soften the curve on FM 2100 at First Street, poor vertical sight distance at the crossing, 200 buses cross the railroad daily, 21 accidents occurred at or near the railroad over a three year study,” there are about “24 trains crossing the location daily,” interrupting traffic flow and their is “no dedicated left turn lane inside the project limits.”

TXDoT indicates their purpose in building the railroad crossing is to improve safety and upgrade roadway flow, improve traffic movement while maintaining local access, and design a cost effective facility to accommodate future traffic needs. Among options for the proposal is a no build option, with indication of no change.

During the viewing of the renderings, Sam Purkiser argued with engineers that the widening of the roadway will rather increase the amount of traffic on FM 2100 from the northern regions, destroy all businesses near the location due to the congestion during construction, lack of parking and loss of access.

Tim Mock says, as do many other residents, “When this thing was first proposed it was with the understanding that people wouldn’t be hurt. People wouldn’t be left less than whole. The way this is proceeding, there are several people particularly between that First Street curve and the grade separation.”

He continued, “My understanding is that the county is trying to do it cheep rather than do it right. They are trying to put five lanes in less than 80 feet, 80 feet is not illegal but their is going to be very short distance between cars that way. I’m all for it as long as people don’t get hurt and displaced without recourse. The original proposal had plenty of space but they squeezed it down from 100 to 80 feet in that area. It seems to me that by doing that they are trying to avoid buying out a bunch of while undermining the foundation of existing businesses by being so close with the construction. I’m for progress but let’s do it right the first time not come back a year after it’s all done and say, ‘Well, now that these places are out of business we need to come back and get another 20 feet to widen the roadway.'”

Another individual indicated that the county was trying to get off cheap by not purchasing right of way up First Street and leave existing businesses alone as they exist. This much discussed citizen’s counter-proposal would put the crossing over from First Street straight to Miller-Wilson Road. It would require the purchase of much more land and build another roadway passed the ball fields and county facilities at and passed Hare Road while straightening another (less used curve) near Ramsey Road. Another citizen counter proposal is to put a new roadway access to US 90 avoiding the disruption of FM 2100.

No announcement has yet been issued by the state concerning the public hearing. Written public comment is still invited on the issue.