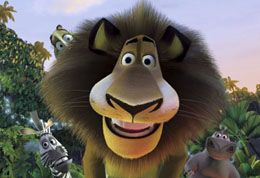 “Madagascar” is the latest CGI’d animated film from Dreamworks. Thankfully, it’s not as bad as that awful shark movie it released last year. In fact, “Madagascar” comes pretty close to matching the entertainment standards set by Pixar, the studio that gave us “The Incredibles” and “Toy Story.”

The film stars Chris Rock as Marty the Zebra, one of the menagerie at New York’s Central Park Zoo. His buddies are Alex the Lion (Ben Stiller), Melman the Giraffe (David Schwimmer) and Gloria the Hippo (Jada Pinkett Smith). The animals have lived in princely, pampered comfort at the zoo for their entire lives.

On Marty’s 10th birthday, some enterprising penguins (voiced by the director and members of the production team) attempt an escape to someplace called “The Wild.” Marty becomes obsessed with the idea of living in the wild and makes his escape. Of course, Marty’s idea of The Wild is . . . Connecticut, and he thinks all he has to do is go to Grand Central Station and hop on a train.

Alex and the rest of Marty’s pals chase after him. Of course, theyre all captured. An animal-rights group convinces everyone that this is the animals’ way of saying they don’t want to live in captivity, so Marty, Alex, Melman and Gloria are crated-up and put on a slow boat to Kenya. Little do the humans realize that the crack commando team of penguins has infiltrated the ship and changed its course to Antarctica. On the way, our crated friends are accidentally knocked overboard and wind up on the sandy shores of Madagascar, where they are greeted by a gajillion zonked-out, party-animal lemurs led by flamboyant King Julien (Sacha Baron Cohen).

Slowly, Alex the Lion begins to hear The Call of the Wild and becomes more and more like a real lion, wanting to eat not only the lemurs, but tempted to make a buffet of his friends as well.

“Madagascar” is a really funny movie, not only for kids, but for grownups too. I’m definitely buying the DVD when it comes out. The curious thing about the film, though, is that most of the laughs are inspired by the supporting cast: King Julien, the penguins and other peripheral characters. This isn’t a criticism, just an observation.