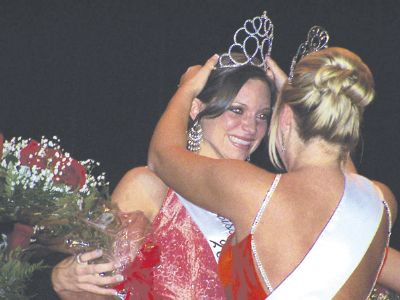 By BOBBY HORN JR.
HIGHLANDSWhitney Bell beat out a field of eight competitors to win the title of Miss Highlands, at the annual pageant hosted last Saturday by the Highlands Horizons.
Traditionally, the Miss and Junior Miss Highlands Pageants are the final events of the Highlands Jamboree. However, because of an uninvited guest named Rita, it was the first event of the year.


Following a western theme, the pageant began with an opening routine to Jessica Simpsons version These Boots Are Made For Walking.
The contestants were rated by a panel of three judges in the categories of sportswear presentation and interview and evening gown. The girls were also judged during the opening routine with the points being used in the event of a tie.
The highlight of the evening was an optional talent competition. Brittany Dew won the talent award.
Lauren Dew, 2004 Miss Highlands, said the interview was, for her, both the most exciting and nerve-racking part of the competition. Each girl is asked to respond to a question, which is kept secret until the pageant. The other contestants are kept back stage where they can not hear the others response. This years question was If you won the lottery, what would you do with the money?. The most popular response was to donate it to charity.
Before the new Miss Highlands was named, five special awards were given.
Kathryn Dunlap, daughter of Highlands Horizons founding member Jennie Robbins, presented the Jennie Robbins Community Service award to the contestant who best embodied the idea of community service. Bell was also named recipient of this award.
Bell and Brittany Smalley won the Congeniality award. This award is considered extra special because the contestants vote on it.
Candace Smith won the award for high-ticket sales. Prior to the pageant, the contestants had their pictures taken at a mother-daughter tea. The judges reviewed the photos and Heather Roffe was named Most Photogenic.
In the voting for Miss Highlands, Holly Pogue was named first runner-up and Dew was named second runner-up.
As the new Miss Highlands, Bells duties will include representing Highlands at social events including the Baytown Business Expo, Highlands Christmas Tree Lighting, Baytown Christmas Parade, Rotary Clubs Chili Feast and the Pilot Clubs Community Day festival.
Earlier in the day, Kayla Neathery won the Junior Miss title. Jasmine King was first runner-up and Erin Edwards was named second runner-up.
Neathery will join Bell in representing Highlands at special events.
The addition awards were given to Allison Little for high-ticket sales; congeniality went to Lexi Edwards and Neathery won the most photogenic.
During the pageant, King performed the Vitameatavegamin skit from the I Love Lucy show which earned her the talent award.
During the interview portion, the girls were asked what one thing they would change at their school if principal for a day. Changing the dress code was the most popular answer, with particular attention to shirts being worn untucked.