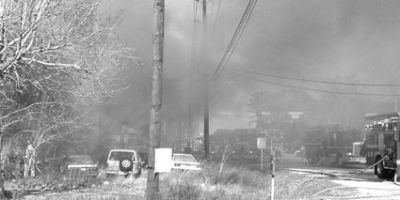 This single story, commercial fire on FM 2100 less than a block south of FM 1942 occurred about midday, Monday and due to high winds and dry conditions nearly exhausted the pumper retained at Reidland before the rest of Crosbys volunteers and pumpers on the North end of the tracks (waiting on trains) could get to Barrett Station. The following day, another fire would find firefighters waiting to cross from South on the tracks. The Governor of Texas Rick Perry has emphasized the vulnerability of the Texas Countryside under current conditions by issuing a Disaster Declaration on Dec. 27. Harris County has placed a burn ban with ban on aerial fireworks into effect. According to Tracy Weaver of Texas Forestry Service, It is critically, critically dry out there right now.