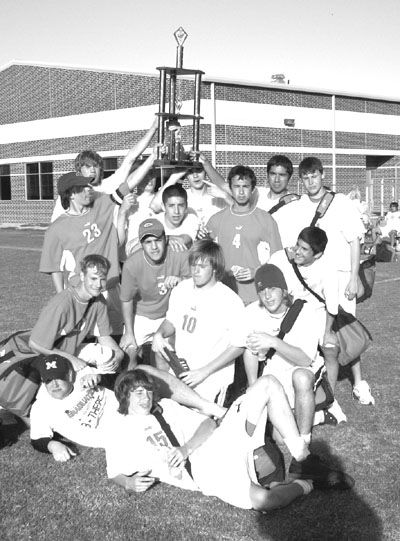 WALLER The Crosby High School boys varsity soccer team made the best out of a two-day 12-team tournament hosted by Waller High School bringing home the championship trophy.
This was the first tournament championship for the high school program and they set a program record for five straight shutouts. The Cougars scored 21 goals and only allowed one goal to be scored against them in the six games played.
The Cougars faced Brazosport in their first encounter and won 5-1.  A stiff wind all day made the Cougars work extremely hard to keep the ball in play.

Austin Roden scored the first goal on a cross from Kyle Claunch.  Julien Genot followed with a goal from another Claunch cross.  Brazosport was awarded a penalty kick and made the score 2-1 before the Cougars added three more second half goals.
Genot assisted on a left-footed kick outside of the 18 from Juan Ochoa.  Roden challenged the goalkeeper one-on-one after receiving a pass from Claunch for the fourth tally. The final goal, from Ramiro Rodriguez, came as the goalkeeper tried to block the first shot from Wes Felker.
The second game pitted Bryan against Crosby where the Cougars won 3-0.  A throw-in from Claunch to Jed Garner netted the first score. The goalkeeper fumbled a shot from Julian Salazar allowing Keith Lund to crash the goal.  The third and final goal once again was instituted as the goalkeeper mishandled a direct kick from Eddie Morgan allowing Roden to tap the ball into the net.
Navasota fell short to the Cougars 5-0 at the end of the day.  Genot punched a cross from Eric Barajas into the net and Claunch scored from an assist from Salazar in the first half of play.  Claunch later scored on a cross from Jed Garner.  Jose Garcia tallied two goals with assists from Claunch and Rodriguez.
On Saturday, the eight high-point teams returned to the field to play.  Crosby went into the second day as the number one seed.
They once again faced Bryan and showed the team that their initial win was no fluke. This time Crosby outscored Bryan 5-0.
After a shaky first half with only one goal from Barajas, the Cougars settled down.  A tripping foul was called and Eddie Morgan lofted a directed kick to Scott Holmelin for an easy score.  Morgan sent another direct kick into the face of the goal for Genot to head in.  Later Roden headed a ball across the goal for Garcia to redirect into the net.  Morgan sent a third direct kick into play for Rodriguez to touch in for the score.
The semifinal game was intense against New Caney.  Neither team could manage to score in the first half. Midway into the second half, Juan Ochoa shot from the left outside of the 18 to put the Cougars into the finals.
Host team, Waller, faced the Cougars for the championship. Garcia managed to be in the right place at the right time twice.
In the first half he received an accurate corner kick from Barajas to put the Cougars ahead. Later in the second half, Felker sent a ball across the field to Lund who headed the ball to a waiting Garcia in front of the net.
The Crosby defense of goalkeepers Morgan and Alex Walthall as well as defenders Kevin Abernethy, Jose Cepeda, Barajas, and Garner was relentless. The midfield play from Royce Cornett and Dustin Demasi helped maintain the offensive threat as well as provide defensive support.
Crosbys Eric Barajas and Kyle Claunch were named to the All-Tournament Team and Jose Garcia was named the as Tournaments final game MVP.
This six-game win gave Coach Nathan Helburg his 101st win during his on-going career at Crosby High School.