Chisholm named Firefighter of the Year by Highlands VFD 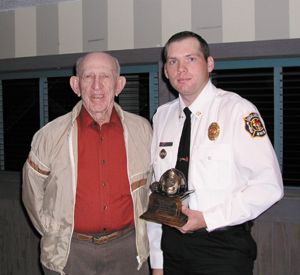 HIGHLANDS The top recognition given each year by the Highlands Volunteer Fire Department is the Firefighter of the Year. This honor is given in recognition of the firefighter who has by vote of the membership performed above and beyond the call of duty as a volunteer. This years recipient is Glenn Chisholm, Station 2 Chief.

The award was made at the Departments Banquet last Saturday night, held at the Monument Inn. The Award is given in honor of the 42 years of service by volunteer fireman Cecil Kelly, who was on hand for the presentation. The actual award was made by board member Jerry Ickes on behalf of the whole department.
Other major awards presented at the dinner were the Citizen of the Year, to Cindy Birdsong Willingham, presented by her father Bobby Birdsong, and Business of the Year, to Kenneth & Sheila Vermillion of Glove Guard. They have helped for several years with the kids safety project and coloring books, and helped with the mailing of department information.
A new mascot was announced, and it is Alex McMorrow. Retiring is last years mascot, Michaela Mays.
One year service awards were given to Dustin Purvis, Timmie Hendricks, Blake Goldman, Jack Ickes, Jennifer Errisuriz, Daniel Spiers, Jessica Neal, and William Merrill.
Five year service awards went to Teresa Campbell, Sarah Tittel, Reggie Elliott, and Nick Matula.
Ten year service award went to Glenn Chisholm. Twenty year service awards went to Jeanette Thompson and Mary York.
Junior Firefighter of the year was awarded to Blake Goldman, and Rookie of the year honors went to Daniel Spiers.
Chief Harvey Little and EMS Chief Kacey Sammons presented an overview of the accomplishments of the department in the last year, and goals for the new year. Jackie Ickes presented a report on the training program.
In Chief Littles report, the highlights included the safety of the department, short response times, and financial stability. Little mentioned that the public, and some members of the press, dont understand that area departments work together in an automatic response and automatic aid program, and depending upon where the call comes from within the departments 10 box assignment areas, any one of several departments may be dispatched to answer the call. The absence of Highlands equipment does not necessarily mean that they could not respond, but that a planned coverage is in effect, the Chief said.
Other accomplishments included purchase of a thermal imaging camera, initiation of a joint program with the Highlands Rotary to install free smoke alarms in area homes that request them. You can call the department at 281-843-2466 to join this program.
New equipment added this year includes a 2007 Chevy Brush Truck, replacing the old 1952 Duce and 1/2, a rechassied 1999 ambulance now on a 2006 Chevy diesel, and the donation of a 1999 Chevy Suburban Squad Car/Chiefs Car by the Little York VFD.
In her remarks, EMS head Sammons the new ambulance chassis, a Safety Day at Highlands Elementary School, 6 new paid employees to maintain a full time EMS staff, and upgraded cardiac monitors.
Chief Little said that the department will soon put on a recruiting drive, since the number of regular firefighters now stands at 34, although 60 positions are authorized. With apprentice, junior, retired, and EMS personnel, the total department manpower now stands at 75 members.
In reviewing call history for 2006, Little noted a 19% increase over the previous years.
There were a total of 1777 calls, of which 1419 were EMS, 358 fire responses, 792 ambulance transports, 137 motor vehicle accidents, and 32 LifeFlight calls.