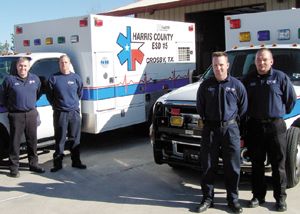 By LEWIS SPEARMAN
CROSBY  On November 12, the ESD#5 Board put another ambulance crew in service to handle peak hours after six months in which the volume of calls increased from between 5% to 13 %.
The move was to reduce response time. While the national average is 9 minutes between calls and ambulance arrival as determined by U.S. Department of Transportation, Crosby is now running about 7 minutes.

Peak hours for ambulances in Crosby are 10 a.m. until 10 p.m. Monday through Thursday and 24 hours Friday, Saturday and Sunday, based on actual call averages, according to Christy Graves, Coordinator of Ambulance Services for ESD#5.
In the 6 months before that November, accidents became the most prevalent calls for the Crosby District, ahead of the expected respiratory distress. The volume of all calls accelerated from about 130 calls a month to an average of 154 calls per month with some months as many as 210 calls. Traffic accidents are currently about 18% of their ambulance calls.
Before the move, about 14 to 27 calls per month had required mutual aid for ambulances coming for longer distances outside the district. Longer distances mean longer response time before medical aid is rendered.
Medic #62 is a 2006 F-350 Ford Frazier diesel chassis purchased using a grant written by Christy Graves for $30,000 from the Texas Department of Health in addition to local taxes and user payments. Medic #63 is a 2007 F-350 Frazier diesel chassis with a remounted box of sirens, lights, medical equipment and graphics. The remounting saved $30,000.
Crosbys ESD#5 is making preparations for a possible building expansion to replace aging ambulance equipment as it becomes economically sound.
The move to a second crew was prompted as an expected occurrence of increased calls from an increase in population density over the Crosby ISD area, that is the area covered by ESD#5 outside of mutual aid calls. This area entails from the South end of Indian Shores Road, South to the North end of Barbers Hill Road, West to Lake Houston and East to the Harris County Line.