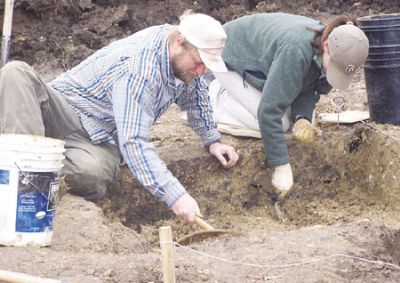 By BOBBY HORN JR.
LYNCHBURG An archeological god going on outside Highlands in helping give scientists a better idea of life during the infancy of the Republic of Texas.
David G. Burnett, the first president of Texas, made is home at Lynchburg. The remains of the home known as Oakland have been lost to the ages; or have they.
A team of scientists from the firm of Roger Moore Archeological Consulting in Houston has discovered a cistern or pit at Burnett Park that they say could help mark the location of Oakland.

This past week a shovel test survey revealed an 8 long pit, Based on the various levels of clay, the team determined that the pit had been deliberately dug and it was likely used as a trash dump.
Project Archeologist Randy Ferguson said that a similar survey done in the 1980s discovered a pit where whole bricks dating back to the mid-19th century were discovered.
Ferguson said that in the pit found last week they have discovered ceramic shards and square head nails of the same time period. He said that such pits were commonplace during the time and that based on what type of artifacts are found they can determine the approximate location of the pit in proximity to other structures. For example, a pit close to a home site would have ceramic and glass in it while one out in a field might have farming implements buried.
Ferguson said that the state has regulations that require archeological studies before construction can be done on historic or prehistoric sites or government-owned property like the park.
Improvements at Burnett Park are part of a larger project being conducted by Commission Sylvia Garcia. Entitled Project Stars, the project goal is to highlights area of historical significance in East Harris County. Among the projects planned are to build an interpretive center and pavilion at Burnett Park.
Ferguson said that the team expects to be onsite for a week before submitting a final report.