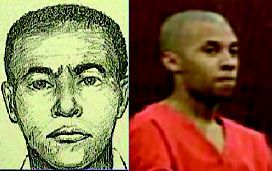 By LEWIS SPEARMAN
HOUSTON  The 19 year old man arrested in connection with a series of attacks on two men near Highlands is in a heap ‘o trouble, with more coming.
Six new charges were filed against Keith Chester Hill on Monday, February 12, in two cases and Wednesday he is to face three more cases with more charges expected to follow.
Currently, six charges from the Harris County Sheriff’s Department are all first degree felonies. They are three counts of aggravated robbery, two counts of aggravated kidnapping and one count of aggravated sexual assault.

According to Lt. John Martin, One of our detectives spoke with him and obtained a written confession. So far he has been cooperating with our investigation.
These confessions were related to three charges against him from April and September attacks. They detailed Hill stalking his victim for days before the attack, and in one case entered the home of the victim days before the attack.
The Baytown Police filed two charges; aggravated sexual assault and aggravated kidnapping in connection with an attack last May.
Items reported stolen by victims turned up at Hill’s Tanglewilde residence.
Law Enforcement says Hill became a person of interest back in December. One of the victims pointed out Hill to Law Enforcement as he happened to drive by him in another car. When DNA evidence taken from Hill matched that taken from a victim, Hill was taken into custody late last Tuesday.
Detectives say, It is very unusual for a male that sexually assaults another to allow the victim to live.
Prosecutors indicated that Hill had posted a nude picture of one of his victims on MYSpace.com. According to prosecutors, after kidnapping one young male, he forced the victim to withdraw money from ATMs.
Authorities say sexual gratification was the motive for the attacks.