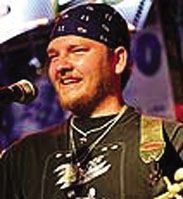 By LEWIS SPEARMAN
CROSBY  The Fair board announces all but one of this year’s fantastic star lineup for the concert at the 61st Fair & Rodeo here in June.
The Crosby Fair & Rodeo Board seems to bring in better acts each year, and seeing them here has proven to be a value because the performers have a tendency to go big after playing Crosby. When Kenny Chesney played here this earlier this century some people asked who is that? They don’t ask that now, nor do they ask who Pat Green is, anymore. Last year, the Kevin Fowler concert then Cory Morrow concert packed the Rock’n C Arena about as well as Dierks Bentley’s in 2005. The shows in Crosby are catching the public’s imagination.

On April 21, Jake Hooker signed to play the annual Crosby Fair & Rodeo Dance, he was a hit last year. Faded Lights and Lonely People is climbing the charts and hosts a distinctive edge on the Texas honky tonk sound.
Darrell Dodd entertains for the Crosby Fair & Rodeo Cook-Off Party on June 1. An affable Dallas resident now, Dodd recorded his album, Stronger Proof, last year, a honky-tonk archetype, in Nashville. After moving to Nashville in 1991, he toured with Martina McBride as her guitar player. In 1994, he joined Tracy Lawrence’s. In 1996, his first hit was a cover of Tom T. Hall’s “That’s How I Got to Memphis.” Two years later, he rose even higher with “A Bitter End.”
However, he was forced to turn down tours with Tim McGraw and Brooks & Dunn after being diagnosed with viral encephalitis, a central nervous system disorder. He is on the way back up the charts after some incredible success with physical therapy. See him here or pay more later.
Wade Bowen will open the Thursday night Rodeo concert on June 7. For the last six years this young man has paid the dues and rode the circuit between Nashville and Austin. Late this summer, new his album will debut and some labels have been tantalized to pick him up. If it goes as big as his sound, he probably wont be playing local very often. Critics say he is Texas music, alternative country, roots rock and guy rock, he is hard to pigeon hole. Born in Waco, Texas, Bowen attracted large audiences with God Bless This Town. It was number 4, then Live In New Braunfels won the 2004 Bluelight Live Album of the Year.
Stoney LaRue, 28, of Taft, Texas is playing about 300 shows a year nationwide and in the Caribbean. Somehow John Anderson comes to mind when hearing his music. A natural talent that never thought of doing anything else but play music for a living, LaRue will close out the Thursday night Rodeo with an awesome mix of craftsmanship, barroom wit, and the charismatic catharsis that flows from his flawless voice and catches an arena full of listeners.
Friday night’s concert begins with Aaron Watson. Off the Record played top five in Texas in 2003. Capping that with Reckless playing top 5 of the Texas Music Chart for two months. The Amarillo native is now touring about 200 shows a year and has come to be called the Honky Tonk Kid. A songwriter and polished vocalist and guitarist, Watson produces unique quality.
Jason Bowland and the Stragglers, 32, closes the Rodeo Friday, June 8. Somehow Waylon Jennings comes to mind when hearing his voice. This baritones first album release in three years, delivers a seasoned sonic indulgence mellowed with age and wiser for the wear.
An untamed songsmith and performer, Bowland emerged first in 1999. Now that 50,000 combined record copies sold independently, he is being backed with some musically well endowed. The Stragglers are Roger Ray (pedal steel, lead/rhythm guitar), Brad Rice (drums/backing vocals), and Grant Tracy (bass). Additional record contributions goes to Noah Jeffries on banjo, mandolin, and guitar.
The quiet, delightful confidence sometimes found in native Texans is the make-up of Charlie Robinson’s voice and a mature, conscious thinking and concentration on heartfelt ballads and bittersweet depths of emotion come through in his songs. Although his personality by reputation was more of a brash maverick with lyrics designed for the roadhouse dance floor. Recently, he released Magnolia and voiced a depth of emotions from beyond. But there is the fun stuff too, on Love Means Never Having to Say You’re Hungry. one has to entertain the double entendre.
When things get really heavy, I always have to break the tension, says Robison, I’m not putting myself on a songwriter pedestal. I’ve always been a huge fan of John Prine, who would write a record with all this heavy stuff, then there’d be something like, Illegal Smile. Tom Waits is the same way, I’ve been strongly influenced by those two guys.