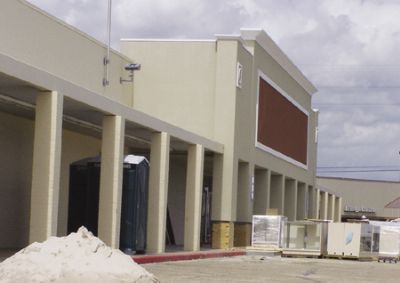 CrosbyÑToday and Tomorrow, Second in a three-part series.

By DON SPRINGER
A few issues back the Star-Courier carried a Lewis Spearman article about water service contributions to the growth of Crosby. That article indicated 4,000 home starts are planned in this area by next year. That, and business inquires received by the Crosby-Huffman Chamber of Commerce has chamber officials smiling. Crosby has been discovered and fast growth is here.
Four thousand more homes in this area will mean more changes and certainly more businesses coming to the area. When Palais Royal announced it would open a store here on April 18, 2007, Chamber President Steve Coon said, ÒawesomeÓ and added, Òwe are in a growing area and should embrace this as part of this growth.Ó
In a more recent interview he said, there are more large chains and other businesses moving in and others showing interest. ÒThis reminds me of the Rt. 59, I-610 and Rt. 6 growth to Rosenberg that hit Southwest Houston several years ago. In the 1980Õs that area was mostly fields and now is almost solid with businesses and homes. All of the earmarks are here in Crosby for the same growth.Ó


Palais Royal is committed to move into the old Wal-Mart building but many other businesses have opened along 2100 over the past year or more. This would include the new Wal-Mart, Quiznos, Starbucks and Applebees, to name a few, and several smaller businesses in recently built strip malls.
When asked about other businesses expected to become part of the Crosby scene chamber officials said Òsome interest has been shown but there is nothing firm at present. There is a lot of property available here for homes and businesses.Ó However, the Star-Courier has learned from other sources that at least two of the recent inquiries have come from hotel chains. Interest has been shown in property along 2100 and new Hwy. 90.
The Chamber itself is growing and Executive Director, Mitzi Plumb, said about 25 new memberships have been added in the last few months. The Crosby-Huffman Chamber now has 210 members on its roles. ÒThis small country town is changing,Ó she commented. A look at the chamber membership list shows that some of the members are those from outside the area but Òhave interest in CrosbyÕs future.Ó Members come from as far away as San Antonio.
Upgrade work on FM 2100 should have an impact on CrosbyÕs future growth. This on again, off again, project is now scheduled to begin in early 2008 and should add positively to the traffic patterns and land value along its perimeters.
As for home starts, several tracts are opening up within a two- or three-mile stretch of 2100. Within the past several weeks land moving equipment has been relocating dirt along Kenning Road on the Barrett side of Rt. 90. A few hundred homes should be forthcoming from that site. Another has opened behind the Crosby State Bank building on 2100 and a third has been committed along Hare Road across from the post office.
Businessman and land owner, Bill Murff, owns Ò260 acres behind Wal-MartÓ that he hopes to sell to a developer. ÒI had it sold but the developer and the Crosby MUD could not get together so it is now on hold,Ó he told the Star-Courier. When the situation is right that tract will enter CrosbyÕs growth picture.
His son, Scott Murff, is involved in some dealings of properties along 2100 North of Crosby, but Ònothing is firm and I am not prepared to talk about it,Ó he commented. There are other smaller tracts and individual home sites being developed or sold across the area that will be homes of the future or additional business sites.
One of the major players in most all of these additions is the Crosby MUD, discussed last week. When all, or part, of these subdivisions come into play Crosby MUD will see a dramatic increase in its meter count, not unlike that experienced by the Newport MUD.
Next week: CrosbyÑThird in a three-part series looks at the Crosby Independent School District, the Crosby Branch Library and the Crosby Post Office.